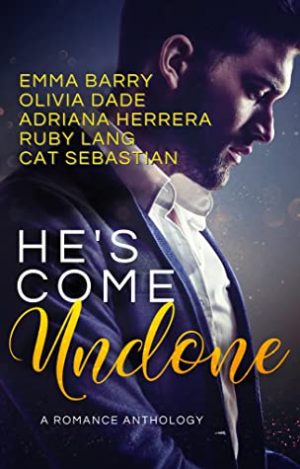 He’s Come Undone is a wonderful anthology with five unique romances. Here are my thoughts on each (book blurbs are listed below the review).

Brennan is an expert piano technician, and he’s been selected to prepare an instrument for Kristy, who’s been off-circuit for a couple years. Right off the bat, I love that Brennan NEEDS Kristy to be okay, for the rumors of her issues to be wrong. He stands apart, knowing he was/will never be good enough to elevate to the next level, but he doesn’t hold that against her.

After a long day, Brennan snaps and tells Kristy she is the problem; that she’s playing too controlled and not opening up, and this is what allows them to open to one another, to share and listen. The story is fluid and beautiful, evoking the sense of a melody with its highs and lows. There is so much heart in these characters.

I loved the ebb and flow of this one. Rating: A-

Math teacher Simon is assigned to mentor new art teacher Poppy, and it’s almost as if he’s looking to have issues with her teaching style. But over a short time, he realizes his assumptions are bad. I love that this story is shared solely from Simon’s POV.

In opposition to “Appassionata,” “Unraveled” is messy and chaotic, and equally as lovely. Simon is order and Poppy is an explosion. Simon had a messy childhood; parents fighting all of the time. He found solace in the order of mathematics. And until Poppy, he never thought that a romantic relationship could mean the whole is greater than the sum of the parts. Over a week, we see how Simon’s attraction grows, how is heart opens.

“He and Poppy together made an entirely irrational number, expansive and infinite.” Rating: A-

This one starts in the middle of the journey and it works. We open the morning after out-and-proud pro baseball player Yariel and thought-to-be-straight, best friend Hatuey had sex. They’ve been affectionate and close for years.

The story focuses on Hatuey finally realizing Yariel is his soulmate and Yariel’s worry that he’s corrupting his friend and that he’ll lose him forever once Hatuey realizes the mistake. The story is quick but covers a decade of feelings that are exploding. The affection and deep love are tangible and beautiful.  Rating: B/B+

Darren is a doctor with high blood pressure. In an effort to reduce stress, he decides to try meditation and accidentally goes into an improve class taught by Joan. Joan moved home to take care of her aging mother and is overwhelmed. I was taken by the weight of Joan’s guilt – that she moved back home too late; that she shouldn’t be out enjoying herself.

The couple connect each Wednesday, with precious few minutes. He is patient and kind, she is worried and frantic. They work. Joan feels she can’t commit to more and walks away, but realizes she has to redefine herself in her new setting. HFN ending. Rating: B

Historical setting – late 1950’s. Tommy and Everett were classmates at a private school. Tommy comes from a wealthy, highly political family. Everett was his roommate. They were best friends and fooled around. Ev couldn’t handle being just friends and ghosted Tommy. Years later, Tommy’s son attends the same school, where Ev is now an instructor.

I love the tenderness between the pair as they open up and reconnect. As they admit their feelings from the past and explore if they are still an option. As they redefine who they are to each other and themselves. Rating: A-

A WONDERFUL anthology filled with five amazing romances from all walks of life.

For him, control is everything…until it shatters, and now he’s come undone.

Piano technician Brennan Connelly lives to control details: the tension on a piano string or the compression of hammer felt. But he’s never faced demands like those heaped on him by Kristy Kwong, the diva who’s haunted his dreams for two decades. Kristy’s got her own secrets–the debilitating stage fright that’s kept her from performing publicly for years to start–and this concert is the last chance to save her career. But can he locate her lost passion without losing his precious control?

When best friends Yariel and Hatuey’s gaming night turns into an unexpected and intense hook up, Hatuey can’t wait to do it again. Yariel is less certain–the major leaguer might seem to all the world like he has a heart of stone, but he’s been carrying a torch for his friend for years, and worries this will ruin the most important relationship in his life. That means Hatuey has to do all the work, and he’s planning to give it all he’s got. Yariel may be the one hitting home runs on the field…but Hatuey is playing a game of seduction, and he knows exactly how to make Yariel crumble.

When rheumatologist Darren Zhang accidentally sits in on acting teacher Joan Lacy’s improv class, he’s unprepared for the attraction that hits him–and he’s a man who likes to be prepared. Joan is caring for her ailing mother and barely has time to keep up her art, let alone date. But as the pair play out an unlikely relationship during stolen moments, they both find themselves wanting to say yes, and… much more.

Massachusetts, 1959: Some people might accuse mathematician Everett Sloane of being stuffy, but really he just prefers things a certain way: predictable, quiet, and far away from Tommy Cabot–his former best friend, chaos incarnate, and the man who broke his heart. The youngest son of a prominent political family, Tommy threw away his future by coming out to his powerful brothers. When he runs into Everett, who fifteen years ago walked away from Tommy without an explanation or a backward glance, his old friend’s chilliness is just another reminder of how bad a mess Tommy has made of his life. When Everett realizes that his polite formality is hurting Tommy, he needs to decide whether he can unbend enough to let Tommy get close but without letting himself get hurt the way he was all those years ago.