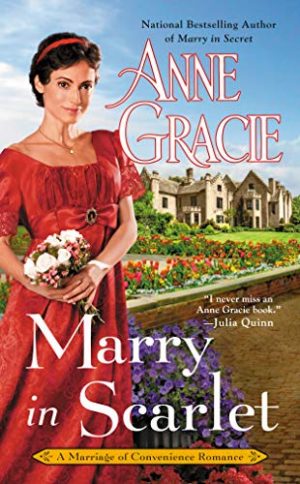 Let me start by saying I really enjoy Anne Gracie’s books, and I have been reviewing them for a while now. I started with the Chance Sisters series, which are completely enchanting and fun, and feature characters that are easily in my top twenty heroines. If you look at my past reviews you will find I have also enjoyed the Rutherford sisters (Marriage of Convenience series) and their stories as well, and I had high hopes for Lady George’s story since she is the most unconventional of the sisters. While parts of the story totally met or exceeded expectations, other parts fell a bit flat, thus the B grade.

My main issues were that the novel overall felt a bit wordy, like Ms. Gracie was trying to meet a word quota or like she was wandering about via words until she could land upon the word to continue the story forward; this is very unlike Ms. Gracie so it could have been a struggle with the characters themselves–not knowing where or how to proceed, but I found it distracting and it very much messed with the flow of the novel.

That being said, there were other parts of the novel where I felt like I wasn’t given enough information, for example at the wedding, we know from the synopsis that Lady George will wed in a scarlet dress but we are not given a single real detail about it. What did this scandal inducing dress look like? Was there maybe a touch of ivory piping under the bust? Maybe some ivory lace at the neck or cuffs? Daisy Chance is known as THE dressmaker for the young women of the ton and yet we are given nearly no details about this scandalous yet perfect dress. I was so disappointed.

Despite the above issues and a few other minor things, like the twist at the end which felt out of place, I did enjoy Lady George and Hart’s story. They suit each other well with their fire and strength, and they temper each other beautifully when necessary, which I was not expecting. I appreciate their humor and heart and enjoyed watching both of them grow as individuals and as a couple.

Something Ms. Gracie does beautifully is give us fully rounded secondary characters that are not just shadows filing in the space in the background. She doesn’t disappoint in this novel either and gives us a complete picture of the girls’ favorite aunt, which was a total “awwww” moment for me and we come to understand Lady Salter a bit better as well. All in all, Marry in Scarlet was a lovely end to the Marriage of Convenience series even if this marriage wasn’t a true marriage of convenience. We come to know Hart and George better and see them learn to think of themselves less and others more, which is always endearing to me. Overall, I give this novel a solid B despite it’s flaws.  It may take a bit to get into and you may find yourself wandering some unexpected and even unnecessary paths, but overall I think you’ll really enjoy the journey.

The proud and arrogant Duke of Everingham is determined to secure a marriage of convenience with heiress, Lady Georgiana Rutherford. He’s the biggest prize on the London marriage mart, pursued by young unmarried ladies and their match-making mamas, as well as married women with a wandering eye. He can have any woman he wants. Or so he thinks. . .

Lady Georgiana Rutherford–irreverent and unconventional–has no plans to marry. Having grown up poor, Lady George has no intention of giving up her fortune to become dependent on the dubious and unreliable goodwill of a man. Especially a man as insufferable as the Duke of Everingham, whose kisses stirs unwelcome and unsettling emotions . . .

…Sparks are sure to fly

The more she defies him, the more the duke wants her, until an argument at a ball spirals into a passionate embrace. Caught in a compromising position, the duke announces their betrothal. George is furious and when gossip claims she deliberately entrapped the duke–when she was the one who was trapped–she marches down the aisle in a scarlet wedding dress. But the unlikely bride and groom may have found love in the most improbable of places–a marriage of convenience.