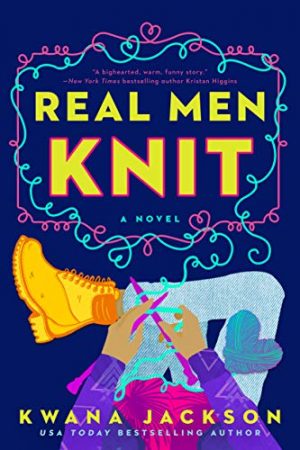 Real Men Knit starts with the passing of a beloved character, Joy Strong, whom we never get to meet.  We learn about her devotion and selflessness through the people that knew and mourn her. Her passing leaves a large hole in her family and community which motivates them to action.  The story follows Mama Joy’s children as they cope with her passing and have to decide what to do with her knitting store—a store which has been a source of hope and unity for the neighborhood.

Strong Knits has also literally been home to Mama Joy and her sons.  They live in the apartment attached to the store as so many small business owners do in the Harlem district of Manhattan, New York. The brothers must decide if they’re going to keep the store to generate income or if they must sell to settle debts Mama Joy made to keep the store afloat.  Youngest brother, Jesse, decides he’s finally going to ditch his playboy reputation and take charge of updating and running the store. He enlists the help of Kerry Fuller, their part-time employee who knows everything there is to know about running the store.  Jesse and Kerry went to school together.  Even though she’s familiar with Jesse’s reputation, she’s always had a crush on him.  The relationship develops as they work together to update the store and get it open again.

Kerry is a more sympathetic character. She has a life outside of the shop and is trying to live it.  She goes into the relationship with her eyes open. Jesse kind of flails around before he is able to pull himself together and be worthy of Kerry.  Even when he got there, I was a little weary that he would fall back into old habits under stress. I guess we’ll see in future books.

The plot is not complicated although it is thoughtful and full of details.  Still, as there would be in real life with the death of a loved one, there was a dark cloud that clung to the story and cast a shadow over all the characters. It was hard to relax into their love story because it felt like it was too soon to be happy.

The peripheral characters really shine to fill out the big picture of the community beyond the store. There are the knitting circle regulars and people from the community center where Kerry works her other job. The store “knits” them together and they need it up and running. Jackson has set us up with additional characters to have their own books, Jesse’s siblings and Kerry’s best friend Val.  This has the potential to be good series.

Jesse Strong is known for two things: his devotion to his adoptive mom, Mama Joy, and his reputation for breaking hearts. When Mama Joy unexpectedly passes away, he and his brothers have different plans on what to do with Strong Knits, their neighborhood knitting store. Jesse wants to keep the store open. His brothers want to tie off loose ends and close shop…

Part-time shop employee, Kerry Fuller has kept her crush on Jesse a secret. When she overhears his impassioned plea to his brothers to keep the knitting shop open, she volunteers to help. Unlike Jesse, Kerry knows the knitty-gritty of the business and together they make plans to reinvent Strong Knits for a new generation.

But the more time they spend together, the stronger the chemistry builds between them. Kerry, knowing Jesse’s history, doesn’t believe their relationship can last longer than one can knit one, purl two. But Jesse is determined to prove to her that he can be the man for her forever and always—after all, real men knit.