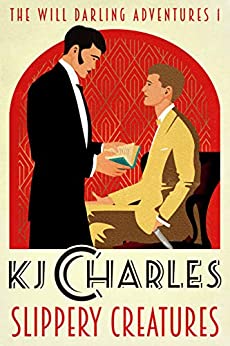 I’d been looking forward to Slippery Creatures for a while, and can happily say that it is among the best books I’ve read so far this year. Anytime I’m inclined to mark multiple highlights at six pages into a story, I know I’m likely to thoroughly enjoy what I’m reading. And, as has happened often in the past, KJ Charles delivered beautifully.

Will Darling went to war at 18 years of age, where he was active as a trench raider in the British army for nearly five years before being wounded, returning home to face empty gratitude and unemployment, and finally inheriting his uncle’s second-hand bookshop in London. Though not a bibliophile by nature, he’s happy enough to have a paying profession and a roof over his head, and would have adapted to that life without much fuss if a secret society (followed by his government’s own War Office) hadn’t made him a pawn in a deadly game he has no interest in playing.

Fortunately for Will, an new ally turns up just when he needs one most in the person of “Kim” Secretan, Lord Arthur. Filled with concern for Will’s plight, and armed with both the time and means to help with the mystery that’s landed in his lap, he insinuates himself into Will’s life as well as his bed in short order, turning the entire situation upside down even more than it was. After that, this story really begins to get interesting (as if it wasn’t already).

As a mystery, Slippery Creatures was a lot of fun to read, with shady characters, plenty of room for second-guessing, a doomsday plot, and a secret worth killing for. I found Will to be a wonderful protagonist, at once jaded and hopeful and endearingly fed up by the end of the story. I also appreciated that the author spent a significant amount of time on the psychology of Will and Kim’s situation, be it the effects of war and/or captivity, familial responsibility and guilt, or even owning up to a most inconvenient attraction.

Which leads to the part about romance. These two characters made me want to throw things, which was perversely fantastic. I think that Will is entirely lovable, even though he’d likely resent the sentiment. Kim, on the other hand, is a reprehensible, duplicitous, guilt-ridden, loyal, conflicted saint of a man, and I honestly couldn’t figure out how I felt about him for much of the story—except that I liked him tremendously most of the time anyway. Will seems to be in the same boat, however, so I’m in good company. They should not work as a pairing for so many reasons it’s almost baffling. So, naturally, they’re fairly perfect for one another.

Additionally, the author also includes plenty of humor along the way—most especially a delightfully and comprehensively explicit piece of Victorian ephemera addressed to “Snookums” from “Booby” that Will and Kim discover in Chapter Seven. Although I found these moments to be both enjoyable and welcome, they seemed even more meaningful and fragile amid the increasingly dire truths and chaos of Will’s situation.

“They are driven by staggering greed at the top and fanatic idealism below, and between greed and fanaticism people can justify anything.”

Some of the darkest moments in Slippery Creatures felt so weighty because they are head-shakingly relevant right now. From Will’s hard-earned views about the war, to a secret society’s nearly governmental sense of entitlement to decide who will rule their new world order and who will be collateral while the current one burns, there’s a lot presented here that bears considerable thought.

In the end, I found Slippery Creatures to be a delightful, provocative, truly gratifying story. Will and Kim are marvelous characters (as are Maisie and Phoebe, both of whom I adored) and it was sometimes a tossup as to who was hurt most through the disillusionment and heartache caused by bad things done in the name of noble causes. Either way, I’m extremely glad that there are two more stories for Will and Kim yet to come, and I’m sort of looking forward to the desire to throw things again because of them soon.

Will Darling came back from the Great War with a few scars, a lot of medals, and no idea what to do next. Inheriting his uncle’s chaotic second-hand bookshop is a blessing…until strange visitors start making threats. First a criminal gang, then the War Office, both telling Will to give them the information they want, or else.

Will has no idea what that information is, and nobody to turn to, until Kim Secretan—charming, cultured, oddly attractive—steps in to offer help. As Kim and Will try to find answers and outrun trouble, mutual desire grows along with the danger.

And then Will discovers the truth about Kim. His identity, his past, his real intentions. Enraged and betrayed, Will never wants to see him again.

But Will possesses knowledge that could cost thousands of lives. Enemies are closing in on him from all sides—and Kim is the only man who can help.