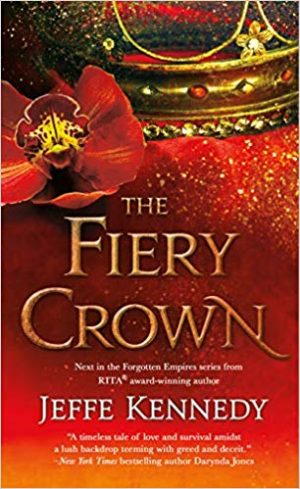 “If we sit here and do nothing,” he said slowly, “Anure will come, take the queen, and scour Calanthe. He’ll kill every living being on this island, which will be an ocean of blood shed in violence. If I’d wanted to sit on my ass and let Anure raze the world, I could’ve stayed in the mines.” His volume had climbed as he spoke, and I opened my mouth to retort, but Agatha spoke first, in her eerily quiet way that somehow cut through angry words.

“No, you wouldn’t have, Conrí,” she said, gazing at him with pale eyes. “Some of us can’t be caged.”

Con brought himself up short, then gave her a courteous nod that surprised me. “True.”

“No one said anything about doing nothing,” I said, taking control of the discussion. “We’re talking about ways to avoid violence. My sacred duty is to protect Calanthe. There’s an option we haven’t discussed that would stop the emperor from coming here. If he wants me so badly, I can go to Yekpehr and turn Myself over to him.” After all, I’d once thought that would be the logical end to my long détente with Anure. I’d seen a future where I’d have to marry him—which would at least give me the opportunity to kill him when he tried to take me to bed. I still could.

An aghast silence fell. Con put a hand on his rock hammer, as if I meant to go right then, and he’d hit me over the head to stop me. “Would it?” he ground out with quiet violence.

“No,” Kara said in his grave-dark voice. “Anure will destroy Calanthe anyway. If there’s a chance to win this, we need you here, Your Highness, with us and with Calanthe.”

Kara held my gaze. Con visibly seethed and Sondra gave him an uncertain glance, then looked to me. Pleadingly? No, I could see that, even if I could muster the courage to do it, Con would never hand me over to Anure. And Kara was right: Anure would destroy Calanthe anyway as punishment, and I’d sacrifice myself for nothing. The time for that gambit had passed.

“We have to fight,” Con said to me, adding to the argument, “but a trap gives us greater control of the situation. It will let me do everything in my power to minimize the blood shed in violence. If we do it right, then it will be less than what Anure would do otherwise. If Her Highness agrees to this much. Do you agree that we’ll fight?” He looked at me expectantly, the others following suit.

I wished I could see a way out of the looming disaster, but I couldn’t. They were right: Blood would be shed on Calanthe no matter what. All I could do was mitigate the damage.

The only wild card in all of this was Con. He’d been the unexpected element all along. I understood better now why the dreams of the manacled wolf breaking his chains had felt so pivotal to me. Con’s escape and revolution had changed everything. We had no choice now but to travel through the fire and either perish or emerge on the other side. If anyone could change the outcome of this conflict, perhaps my wild wolf could. If he couldn’t, well, doom was doom. I feared that I could do nothing to save Calanthe, no matter what choice I made. I conceded with a reluctant nod, and Con’s eyes narrowed as he perceived my unwilling capitulation. So I spoke to avoid another argument that would only lead us to the same dead end. “So you’ll draw Anure to the palace and trap him how?”

“I haven’t figured out that part yet,” Con replied, then looked to Kara.

General Kara glanced to Con for permission, then continued. “We need advice on that. Your Highness knows this island better than any of us.”

I restrained a sarcastic reply. So good of them to notice. “Do tell.” Oops, my sarcasm slipped out anyway.

WILL THEIR LOVE STAND THE TEST OF TIME

Queen Euthalia has reigned over her island kingdom of Calanthe with determination, grace, and her magical, undying orchid ring. After she defied an empire to wed Conrí, the former Crown Prince of Oriel—a man of disgraced origins with vengeance in his heart—Lia expected the wizard’s prophecy to come true: Claim the hand that wears the ring and the empire falls. But Lia’s dangerous bid to save her realm doesn’t lead to immediate victory. Instead, destiny hurls her and Conrí towards a future neither could predict…

OR TEAR THEIR WHOLE WORLD APART?

Con has never healed after the death of his family and destruction of his kingdom—he’s been carefully plotting his revenge against his greatest enemy, Emperor Anure, waiting for the perfect opportunity to strike. When Lia’s spies gather intelligence suggesting that Anure is planning an attack against Calanthe, Con faces an agonizing choice: Can he sacrifice Lia and all she holds dear to destroy the empire? Or does his true loyalty exist in the arms of his beguiling, passionate wife—’til death do they part?

Her award-winning fantasy romance trilogy The Twelve Kingdoms hit the shelves starting in May 2014. Book 1, The Mark of the Tala, received a starred Library Journal review and was nominated for the RT Book of the Year while the sequel, The Tears of the Rose received a Top Pick Gold and was nominated for the RT Reviewers’ Choice Best Fantasy Romance of 2014. The third book, The Talon of the Hawk, won the RT Reviewers’ Choice Best Fantasy Romance of 2015. Two more books followed in this world, beginning the spin-off series The Uncharted Realms. Book one in that series, The Pages of the Mind, was nominated for the RT Reviewer’s Choice Best Fantasy Romance of 2016 and won RWA’s 2017 RITA Award. The second book, The Edge of the Blade, released December 27, 2016, and was a PRISM finalist, along with The Pages of the Mind. The final book in the series, The Fate of the Tala, will be out in January 2020. A high fantasy trilogy, The Chronicles of Dasnaria, taking place in The Twelve Kingdoms world began releasing from Rebel Base books in 2018. The novella, The Dragons of Summer, first appearing in the Seasons of Sorcery anthology, finaled for the 2019 RITA Award.

In September 2019, St. Martins Press released The Orchid Throne, the first book in a new romantic fantasy series, The Forgotten Empires. The sequel, The Fiery Crown, will follow in May 2020.