Please help me welcome one of my favorite people to the blog, Ms. Sasha White…

Do you believe in psychics?

However, I do not believe everyone who claims to be, is. 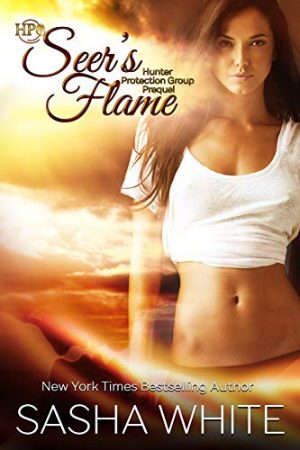 The Hunter Protection world is much like our own. It’s contemporary world inhabited by regular people, and those with special talents and abilities. Seer’s Flame is your induction into that world. It’s a romance, where a regular, straight laced guy falls for a psychic, and learns to believe. Once he accepts, the world opens up to both him, and the woman loves.

When Caleb Mann gets dumped for being boring in bed, he realizes he’s been all work and no play for far too long. Stung, he agrees to be set up by his younger brother, and a case of mistaken identity soon has him following a motorcycle riding temptress into a world never believed in.

Free spirited Gina Devlin can’t resist when she shakes the hand of uptight, pressed jeans wearing hottie Caleb and gets a psychic flash of sweaty naked bodies. She needs a distraction, and he’s perfect, for a night anyway, because Gina’s had enough dreams to know they don’t always come true.

Towards the end of Seer’s Flame, Gina’s brother shows up. He’s been mentioned throughout the story as someone who works for a private security company, and she doesn’t really know what he does. It’s clear that she knows there’s more to it than he lets on, but she doesn’t push, because she loves, and trusts him to take care.

However, being psychic, she also knows when Devil shows up at the end, that he’s there for more than to just be a shoulder for her to cry on. Devil’s story begins right where Seer’s Flame ends, and the world begins to immediately open up. He needs her help, and he can’t hide what he does from her any longer.

I consider Seer’s Flame to be a prequel because the story is a pretty much all romance. It doesn’t have the same action/hunt vibe that the other HPG stories do. Readers could easily skip Seer’s Flame if they wanted to, but I think they’d be cheating themselves if they did. And at the same time, I also think some of those who don’t always enjoy paranormal romance and who wouldn’t be interested in the other HPG stories might actually enjoy Seer’s Flame because it really is a contemporary romance with a small paranormal element.

I would love to say this was all planned that way, but it really wasn’t. Like everything I’ve written except the Overwatch stories, these were not originally planned as a series. I just started writing and then found I kept wanting to revisit and play more in that world. No, with a chance to rerelease them, I’m hopeful hat they’ll find a home in the hearts of a ton of readers, so I can spend more time in the world and write new stories there soon. 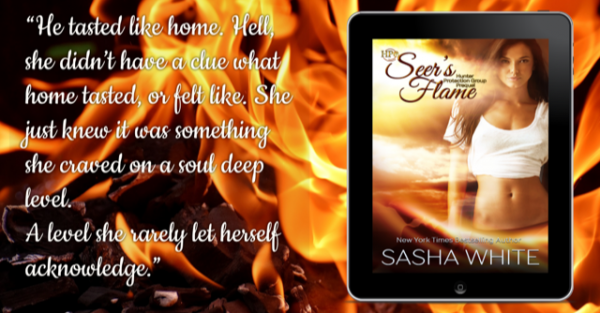 Sign up for Sasha’s Newsletter to be notified of all new releases!

Learn more about Sasha and her books at her website: http://www.sashawhite.net.