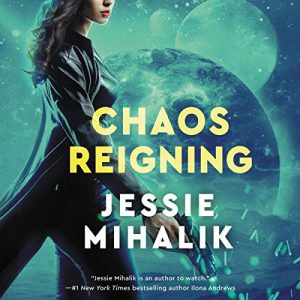 When I started Chaos Reigning I was a bit surprised to find out that it was the final book in the series… there is so much going on and only two of the six von Hasenberg siblings had their HEAs… won’t they all have a story?! While the book doesn’t address all of the outstanding subplots, and in fact adds a few more to the pot, it does conclude a major story arc. Let’s all pray that Ms. Mihalik writes more!

Chaos Reigning picks up shortly after the conclusion of the previous title and is shared from the POV of the youngest von Hasenberg, Catarina (Cat). Cat holds close a secret that if out, would make her a weapon for her father, so she uses her history of health issues and plays up her socialite status, to give others a sense that she’s a dim-witted party girl. However, she’s been helping her siblings from the sidelines in the war. Now she’s got a lead of her own, but sister Bianca is managing her activities, forcing her to have a faux plus one at a two-week party; someone who will keep an eye on and protect her. While Cat doesn’t want the extra “help,” she quickly learns to appreciate Alex for his sharp mind and quick action. It doesn’t hurt he’s extremely attractive and a genuinely nice guy.

Like the two stories previous to it, Chaos Reigning is a fantastic adventure from beginning to end. Cat and her allies start to piece together who exactly was behind the kidnapping of her eldest brother, and soon they are targets of more than one assassination attempt. When the Verse falls apart, Cat risks everything to get back to Earth to try and save not only her family, but the entire Consortium. A plot that no one (including the reader) knows about rears its ugly head and soon, life as they know it is on the brink of collapse. There are ambushes and chases, fast ships and high-tech gadgets. There are secrets and layers, but it all comes together seamlessly.

While the story is heavy on action, there is a slow-burn romance developing between Cat and Alex. Unlike the previous two romances which really tugged on my heartstrings, Cat and Alex fall for one another fairly quickly, and they attempt to get together nearly the entire book. It’s just they keep getting interrupted! I liked the pair together and enjoyed watching Cat learn to trust Alex, which also helps her trust her siblings with her big secrets.

Narration: Chaos Reigning is shared via the first person POV of Cat. Ms. Zeller gives Cat a strong, feminine voice, with a youth and vitality. She alters every character’s voice for dialogue, with each having a unique sound. She does a great job keeping each character distinct. Alex’s voice is deeper with a touch of gentle fondness that betrays his feelings for Cat. The narrator does a good job infusing emotion and situational non-speech verbal cues into the story; she isn’t just reading the story, she brings the characters to life.

The Consortium Rebellion trilogy has been a favorite of mine for three books, and with so many stories still out there to explore, I sincerely hope the author finds time to share them.

Interplanetary intrigue and romance combine in this electrifying finale to the Consortium Rebellion series.

As the youngest member of her High House, Catarina von Hasenberg is used to being underestimated, but her youth and flighty, bubbly personality mask a clever mind and stubborn determination. Her enemies, blind to her true strength, do not suspect that Cat is a spy—which makes her the perfect candidate to go undercover at a rival House’s summer retreat to gather intelligence on their recent treachery.

Cat’s overprotective older sister reluctantly agrees, but on one condition: Cat cannot go alone. Alexander Sterling, a quiet, gorgeous bodyguard, will accompany her, posing as her lover. After Cat tries, and fails, to ditch Alex, she grudgingly agrees, confident in her ability to manage him. After all, she’s never found a person she can’t manipulate.

But Alex proves more difficult—and more desirable—than Cat anticipated. When she’s attacked and nearly killed, she and Alex are forced to work together to figure out how deep the treason goes. With rumors of widespread assaults on Serenity raging, communications down, and the rest of her family trapped off-planet, Catarina must persuade Alex to return to Earth to expose the truth and finish this deadly battle once and for all.

But Cat can’t explain why she’s the perfect person to infiltrate hostile territory without revealing secrets she’d rather keep buried. . . .