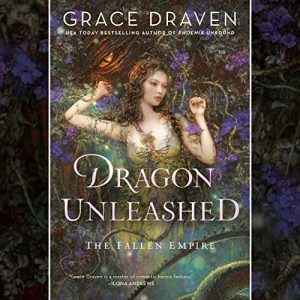 Dragon Unleashed is the second title in the Fallen Empire series (however events in the book have me curious if it’s only a duology or if there will be more). While primarily a sweeping fantasy, the story also shares the slow-burn romance between main characters Halani and Malachus. The story opens with the concluding scene from the first book, although this time, it’s told from Halani’s POV. It’s a great jumping off point, tying the two books together.

Halani is a free-trader, living a nomadic life with her family and friends. She provides for her mother and helps the group by using outlawed earth magic. The group’s leader, her uncle, also relies on Halani to evaluate the value of items. When her uncle has the opportunity to purchase a piece of bone imbued with magic, Halani warns him away, but he doesn’t heed her advice, putting the group in the dangerous path of the empress’s enforcer.

Malachus, a rare draga hiding among the humans, needs to retrieve his stolen motherbond or he’ll die. When he’s gravely injured, the kind-hearted Halani takes him in and helps him recover. Torn between the need to find the missing artifact and his desire to be with Halani, Malachus is unaware that what he seeks may be closer than he thinks.

Ms. Draven continues to add layers to her exciting and dangerous world. While the blood-thirsty empress continues rules over her harsh empire, we see glimpses of a gentler way of life among the free-traders. They work hard and endure hardships, but they have fun and share moments of tenderness and joy. I enjoyed getting to know the different members of the group through both Malachus and Halani’s eyes. And in addition to the primary couple, the story is occasionally shared from the POV of Garrett, the empress’s enforcer as he searches for the motherbond and draga. He’s a morally ambiguous character, ready to do what the empress commands, but does so to protect his daughter.

Narration: Dragon Unleashed is shared from the third person POV of the two main characters, Hanali and Malachus, as well as a few chapters from the enforcer, Garrett. Ms. McEwan performs the entire story using a single narrative voice, regardless of the POV. She has a British accent (I believe), which is enjoyable to listen to while it reenforces the fact that this story is not of our world. She slightly alters her voice and dialect for dialogue, giving many of the free-traders more of an Irish-sounding accent. Male voices are slightly deeper. Each character has a well-suited voice, and everything varies just enough to be able to differentiate who is who.

Dragon Unleashed is a wonderful blend of epic fantasy, dynamic world building, and a lovely slow-burn romance. The sweeping tale is a journey of connections – seeing them in the people and events around the two main characters. Overall, I loved listening to the story, and I hope the author offers more from this exciting world.

Magic is outlawed in the Krael Empire and punishable by death. Born with the gift of earth magic, the free trader Halani keeps her dangerous secret closely guarded. When her uncle buys a mysterious artifact, a piece of bone belonging to a long-dead draga, Halani knows it’s far more than what it seems.

Dragas haven’t been seen for more than a century, and most believe them extinct. They’re wrong. Dragas still walk among the denizens of the Empire, disguised as humans. Malachus is a draga living on borrowed time. The magic that has protected him will soon turn on him–unless he finds a key part of his heritage. He has tracked it to a group of free traders, among them a grave-robbing earth witch who fascinates him as much as she frustrates him with her many secrets.

Unbeknownst to both, the Empire’s twisted empress searches for a draga of her own, to capture and kill as a trophy. As Malachus the hunter becomes the hunted, Halani must risk herself and all she loves to save him from the Empire’s machinations and his own lethal birthright.