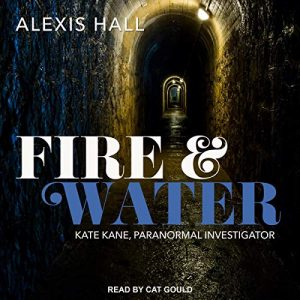 I just finished reading Fire & Water in February, so being able to hear it performed so soon was a lot of fun. In this third novel in the Kate Kane, Paranormal Investigator series, Kate is back six months after the end of the previous story, still adapting to life with a steady girlfriend, a flatmate who is literally comprised of animated marble, and an extremely awkward friendship with her eternally young vampire ex-boyfriend’s new teenaged girlfriend. Still, whiskey doesn’t buy itself, so cases must be taken when they present themselves—even if the client is a magical doodad pawnbroker and scion of faery royalty called the Merchant of Dreams.

Like all Kate Kane stories, Fire & Water is a brilliant, nutty ride from start to finish. Unlike the previous two, however, this story feels thoroughly consequential. It isn’t just that the world itself is at stake, but that others whom Kate is either invested in, or has allowed herself to truly care for have the power to break her in ways she never allowed before. They call on her, and she’s there. In turn, she has learned to call on them when she can’t deny that she needs them. It’s not comfortable territory for Kate, but she’s even more wonderful because of it.

I think Cat Gould has always done well by Kate, and hearing her this time was a very welcome thing. I was a little concerned about how she would handle the POV shift from Kate to Elise, since it’s the only instance in the series so far that we’ve seen things from anyone else’s perspective. Being a living statue who has existed for slightly more than a year, Elise’s voice could easily have slid past curious-yet-neutral into monotonous or robotic. To the narrator’s credit, I believe she helped Elise shine even more. Add to that, her performance as Kate once again towards the end of the book, when Kate is still reeling from the worst few hours of her life, finished winning me over completely.

Fire & Water was as enjoyable an experience in audiobook as it was in when I read it the first time. Kate is unlike any hero I’ve come across before, and I’m keeping my fingers crossed for more of her stories in the future. I strongly feel that new readers or listeners to start this series from the beginning, not just because things might get a lot confusing without the pathways created throughout the previous two stories, but because each one is richer and more vivid than its predecessor. I had also never heard this narrator prior to the Kate Kane books, but I’ll be looking out for other performances by her from now on. Once again, this series has become a favorite, and I can’t recommend it enough.

Ten years ago, I fought for the witch queen of London in a mystical showdown against a King Arthur-wannabe with a shaved head and a shotgun. Back then, the law did for him before he could do for us.

As if the mother of all wizard battles wasn’t bad enough, fate or destiny or a god with a really messed-up sense of humor has dropped a weapon that could rewrite the universe right into the middle of London, and anybody with half a sniff of arcane power has rocked up to stake their claim on it. Last time this happened, the city went to pieces. This time, it might just go to hell.

Also, I’m still dating a vampire. Still have an alpha werewolf trying to get in my pants. Still sharing a flat with a woman made of animated marble – only now apparently there are two of her. But you know what they say: The more things change, the more they stay the same crap that’s been trying to kill you your entire life.