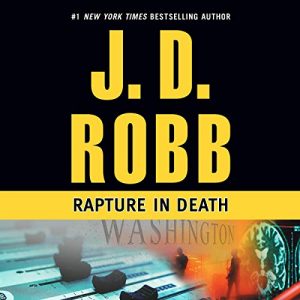 Rapture in Death made me smile so much. Eve and Roarke are back from their honeymoon and they are freaking adorable together. Their ever-growing relationship is fun to witness, they laugh together, they tear each other clothes off and they work great together.

Peabody is quickly becoming a favorite character of mine. She’s working with Eve to learn the ropes of being a detective and she’s super smart and adds to the comedic relief needed to keep the stories from being too dark.

This time around the case focuses on someone controlling the victim’s minds. Someone has found a way to make people end their own lives. They gladly jump off buildings because they are so “happy”.

Rapture in Death is another great installment in the In Death Series. I look forward to listening to Ceremony in Death next.

They died with smiles on their faces. Three apparent suicides: a brilliant engineer, an infamous lawyer, and a controversial politician. Three strangers with nothing in common – and no obvious reasons for killing themselves. Police lieutenant Eve Dallas found the deaths suspicious. And her instincts paid off when autopsies revealed small burns on the brains of the victims. Was it a genetic abnormality or a high-tech method of murder?

Eve’s investigation turned to the provocative world of virtual reality games – where the same techniques used to create joy and desire could also prompt the mind to become the weapon of its own destruction. 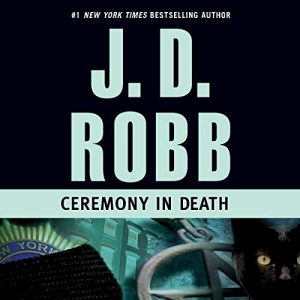 Five books into the In Death series and I find myself wanting more!

Dallas, Peabody, and Feeney are back in Ceremony in Death with a set of murders. This time around it’s personal for Feeney and things heat up between him and Eve when she is lead on the case and can’t share info with him due to orders. Feeney is close to two of the victims and it kills Eve to not go to him for help with the case. Since she can’t use Feeney’s computers skills she turns to her husband Roarke. Have I mentioned how much I love this couple? They are great.

Ceremony in Death deals with two groups of witches (no there’s no actual magic it’s Wicca as a religion). One group is dark and the other is “white witches”. After the two killings of Alice and Frank, the next is more a ritual sacrifice, and the body is dropped at the gate of Eve and Roarke’s house.

So far the reader has been in the dark as to who the killer(s) are on the cases Eve works. You work the case with her and you have ideas who the bad guy is but you really don’t know until Eve does. Ceremony in Death is different because you know who the killer is within the first quarter of the book. The killer gloats in their thoughts about the ritual sacrifice and the placement of the body at Eve’s home. Eve is 95% sure who the killer is but there is a misdirect in the case that has her questions who the killer is but she figures it out fast enough.

Susan Ericksen keeps knocking the narration out of the park. I’m sad I only own one more book in the series on audio. I keep searching the libraries I have access to but I can’t find them on audiobook. I may have to go to my library in person and see if they have some on CD. Luckily my laptop has a CD drive. If not I’ll soldier on with the ebooks from the library or hope Audible has a sale soon.

Conducting a top secret investigation into the death of a fellow police officer has Lieutenant Eve Dallas treading on dangerous ground. She must put professional ethics before personal loyalties. But when a dead body is placed outside her home, Eve takes the warning personally. With her husband, Roarke, watching her every move, Eve is drawn into the most dangerous case of her career. Every step she takes makes her question her own beliefs of right and wrong—and brings her closer to a confrontation with humanity’s most seductive form of evil…