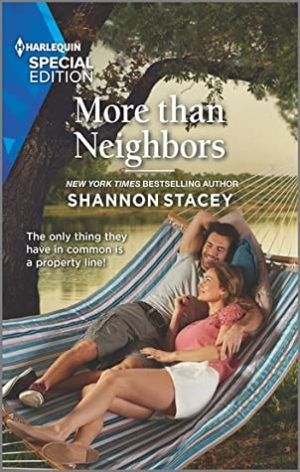 Meredith and her daughter Sophie move to Blackberry Bay, NH, to make a new start after the tragic death of her husband two years prior. Although she grew up in the small town and her parents live near, she’s lived in California ever since she left for college. She quickly warms to their new home and enjoys reconnecting with old friends, although the handsome stranger living next door is a distraction.

Cam Maguire comes from a high-society family of movers and shakers, but he is disillusioned with his parents and his family work. He was adopted by his father after his mother had a brief fling while they were split up. He never knew his birth family, but his birth father’s mother bequeathed her cabin and its contents, along with her cat, to Cam. Now he’s lying to his parents – saying his summering with a girlfriend and her family while working remotely – and is exploring his roots.

More than Neighbors is a sweet romance. Meredith gets a second chance at love, and Cam learns about the family he never knew and what is truly important in his life. They both feel an immediate attraction to each other – something that startles Meredith as it’s the first time she’s felt any sexual heat since her husband passed. She’s reluctant to start anything because Cam’s only there for the summer, and Meredith has a daughter to consider. But after a while, and when her daughter is away, Meredith decides to go for it, and the pair start a summer fling. However, it feels like more because Cam spends a lot of time with Meredith and her daughter, as well as her parents. They are like a ready-made family.

Cam struggles with his identity and place in the world, giving the story a bit of grit and creating bumps along the way.  “Michael Archambault might be his biological father, but he was a Maguire. And a Maguire wouldn’t protect an old pink cottage because a woman he’d never met had loved it.” (Loc 770, 33% Kindle) I like how he looks to find answers and more about his biological family through Caroline’s journals and home.

More than Neighbors gives readers a tender and fun, slow-burn, low-heat romance that still has all the feels. It’s about finding unexpected love and learning what is important in life. And that It’s never too late to find happiness.

The only thing they have in common is a property line!

He’s trying to uncover his past.

She’s hoping for a brighter future.

Cam Maguire is in Blackberry Bay to unravel a family secret. Meredith Price has moved next door with her daughter. He’s unattached. She’s a widowed single mom. He’s owned by a cat. She’s definitely team canine. All these neighbors have in common is a property line. One they cross…over and over. And Cam thought he knew what he wanted—until his family’s secret changes everything.