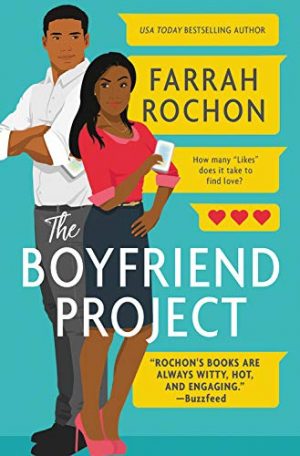 The Boyfriend Project is the first in a new contemporary romance series from Farrah Rochon. The series, which is set up at the start of the book, follows three women who become friends after they discover they’ve all been dating the same guy, something that is captured by social media. Samiah invites London and Taylor back to her place for drinks, and they become fast friends. They form a pack to work on something that makes each happy before starting to date again. This wouldn’t be an issue for Samiah, who makes finishing the app she’s been developing her goal, however new coworker Daniel is too good to be true.

Daniel is taken with Samiah’s beauty and intelligence from the moment they meet, but he’s not in a good place to start any type of relationship: he’s actually working undercover for the federal government. The pair flirt yet try to keep a distance, something that doesn’t work too well, and eventually they end up dating.

Samiah and Daniel make a great team. They are kind and respect one another, and they just click because they get each other. I love Samiah! She’s a woman in STEM; smart, sensitive, caring – and carries the load. I love how Daniel listens and doesn’t minimize her concerns. It’s wonderful to see them connect, even though both are trying to fight it at first. Ms. Rochon builds real characters, and we witness the internal conflicts arising as they develop a relationship. They both experience guilt: him for keeping a huge secret about his real job and purpose, and her for the pact she made with her new friends. She also feels guilty to spend anytime socializing and not working on her app. Yet, they work through the turmoil, finding a healthy balance, eventually.

I loved the mix of slow burn romance with a dash of a mystery. Overall, The Boyfriend Project is a well written, character-driven story. Ms. Rochon has created a world with people I want to get to know better.

Samiah Brooks never thought she would be “that” girl. But a live tweet of a horrific date just revealed the painful truth: she’s been catfished by a three-timing jerk of a boyfriend. Suddenly Samiah-along with his two other “girlfriends,” London and Taylor-have gone viral online. Now the three new besties are making a pact to spend the next six months investing in themselves. No men, no dating, and no worrying about their relationship status . . .

For once Samiah is putting herself first, and that includes finally developing the app she’s always dreamed of creating. Which is the exact moment she meets the deliciously sexy, honey-eyed Daniel Collins at work. What are the chances? When it comes to love, there’s no such thing as a coincidence. But is Daniel really boyfriend material or is he maybe just a little too good to be true?