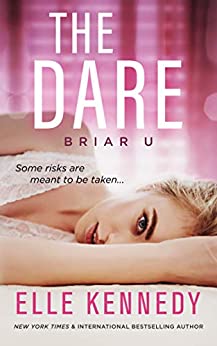 *Swoon* The Dare, is the fourth and final book in the Briar U Series. This is the love story of Conor Edwards and Taylor Marsh.  We met Conor in Hunter’s book, The Play. The fellow Briar hockey team member is good friends with Hunter and played a significant role in helping him to finally connect with Semi—I mean Demi. Conor is playful and relaxed like the sterotypical California surfer dude that he is. While he is, yes, a hormonal playboy with plenty of game, you got the feeling from the trust Hunter placed in him, that he’s the type of guy who always wants to do the right thing.

Taylor, an elementary education major, on the other hand, is an insecure ugly duckling who doesn’t know she’s already become a swan. When she left home for college, she joined a sorority and sought out the sister relationship she never had as an only child. She hoped to make friends and come into her own. Unfortunately insecurities run deep and she can’t see herself the way others see her—especially Conor.

Taylor and Conor meet at a Kappa Chi party where Taylor gets dared to try and seduce Conor. Conor, bored with the party and intrigued by Taylor, decides to play along. Like Emma Stone in Easy A (clip below), Conor lets the world believe he and Taylor shared a hot and heavy night between the sheets so she could save face with the sisters who issued the dare. The world doesn’t know that Taylor is virgin and comes through that night with her “honor“ still intact. Rather than lose her virginity, she gains is an odd, but great friend in Conor. Like Hunter and Demi, friends eventually make great lovers, especially when Conor is one of them. While negotiating to fake date, Taylor questions him, “And, what, you’re saying you’re going to abstain from sex for the foreseeable future? Because I don’t buy that.“ His reply is pure Conor, “Abstain? Hell no. I’m gonna try to seduce you at every turn.”

The relationship that develops between Conor and Taylor is, in a word, wonderful. Their banter is Kennedy’s best yet, better even than Garrett and Hannah from the first book in the Off-Campus Series, The Deal. It’s funny, thoughtful, current, and on-point. They are absolutely brilliant together. They can feel it, but they have to work throught their bumps before they can really be together. Conor has his insecurities too and when one character is up, the other is down. Then they switch and the focus changes. They mature together and it’s lovely to watch.

And guess what? Penises are STILL funny!

Like Coach Jensen’s daughter Brenna, Conor does not live in the same off-campus house with a revolving door of hockey stars and their girlfriends, but since Conor and Hunter both have one year of school left, it does circle back there putting a tidy bow on the front door of this series. Most of the new peripheral players we’ve been introduced to in this book are graduating seniors so it’s unlikely they’ll be stars of a new series. I have no idea what Kennedy has planned next, but I’m not ready to leave campus life. *fingerscrossed* for a new series!

College was supposed to be my chance to get over my ugly-duckling complex and spread my wings. Instead, I wound up in a sorority full of mean girls. I already have a hard time fitting in, so when my Kappa Chi sisters issue the challenge, I can’t say no.

The dare: seduce the hottest new hockey player in the junior class.

Conor Edwards is a regular at Greek Row parties…and in Greek Row sorority beds. He’s the one you fall for before you learn that guys like him don’t give girls like me a second glance. Except Mr. Popular throws me for a loop—rather than laughing in my face, he does me a solid by letting me take him upstairs to pretend we’re getting busy.

Even crazier, now he wants to keep pretending. Turns out Conor loves games, and he thinks it’s fun to pull the wool over my frenemies’ eyes.

But resisting his easy charm and surfer-boy hotness is darn near impossible. Though I’m realizing there’s much more to Conor’s story than his fan club can see.

And the longer this silly ruse goes on, the greater the danger of it all blowing up in my face.