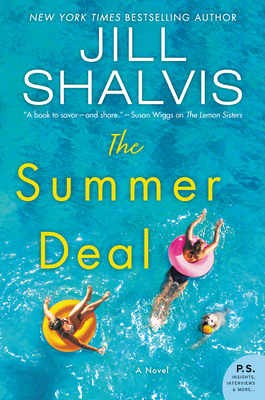 The Summer Deal is the fifth full-length novel in the Wildstone series by Jill Shalvis, but it can easily be read as a stand-alone since the only connection in the series is the town of Wildstone.

This time around we get a story about three people who went to summer camp together when they were younger. Brynn, Kinsey, and Eli. The Summer Deal focuses on the fact that Brynn and Kinsey are half-sisters. Kinsey has known this for years but Brynn only finds out after they are adults.

Kinsey has been dealing with kidney failure since she was a teen and this is how she found out she had a half-sister. Of course, she ends up being the girl at the summer camp she can’t stand.

Kinsey and Brynn get closer and after the secret about them being sisters is out of the bag their relationship changes from frenemies to sisters. It was great seeing them get closer. I also enjoyed the budding friendship and romance between Eli and Brynn. The Summer Deal gives you a bonus romance between Kinsey and Deck, her friends with benefits minus the friends. I loved seeing those two get a HEA along with Eli and Brynn.

The Summer Deal had all elements I come to expect from a Jill Shalvis novel; heart, laughter, touch of sexiness, and great characters you genuinely care about. I look forward to returning to Wildstone should there be more books in the series. Fans of Shalvis’ contemporary romances will enjoy her “woman’s fiction” as well. It’s the same tone of writing but the romances are light on the sexy times. There’s sexy chemistry but fewer details on the love scenes.

Brynn Turner desperately wishes she had it together, but her personal life is like a ping-pong match that’s left her scared and hurt after so many attempts to get it right. In search of a place to lick her wounds and get a fresh start, she heads back home to Wildstone.

And then there’s Kinsey Davis, who after battling serious health issues her entire twenty-nine years of life, is tired of hoping for . . . well, anything. She’s fierce, tough, and pretty much the opposite of Brynn except for one thing: they’re half-sisters. Kinsey is keeping this bombshell, and a few others as well. Long time frenemies from summer camp, there’s no way she’s going to tell Brynn they’re related.

But then Brynn runs into Kinsey’s lifelong best friend, Eli, renewing a childhood crush. He’s still easy-going and funny and sexy as hell. When he gets her to agree to a summer-time deal to trust him to do right by her, no matter what, she never dreams it’ll result in finding a piece of herself she didn’t even know was missing. She could have a sister, love, and a future―if she can only learn to let go of the past.

As the long days of summer wind down, the three of them must discover if forgiveness is enough to grasp the unconditional love that’s right in front of them.