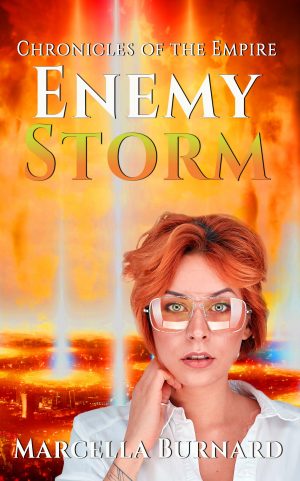 They had bruised the thick, springy anethum moss. It smelled like the tiny, exotically sweet berries it produced in the fall. Sap, sharp and clean scented, folded around them on the blanket of warm spring air.

Visible through a gap in the leaves, the first and largest moon hung near the tops of the trees, the crescent barely illuminated. The twins would follow, a pair of tidally locked bodies that couldn’t properly be called moons, but her culture did anyway, and planned important events around the rare occasions all three were full and visible in the night sky at the same time.

She sighed. She hadn’t let herself miss her world before, and now she stood to lose it to the Chekydran.

Gentle fingertips brushed her cheekbones. The touch resonated through her nerves, lighting up pathways in the darkest parts of her brain, in places the SEM never accessed. He closed the door between their minds. She gasped.

He caught her lips with his.

Every ounce of Edie narrowed to that contact. To the subtle, sweet taste of him. Old scabs came off her wounded heart.

He deepened the kiss, lingering, taking his time, testing her response, seeming to delight in every gasp and in the quiver running through her muscles.

Lost in the sea of him, she wrapped her arms around him. The weight and heat in her lower belly built to an ache. As if she’d been engineered specifically for him, the stroke of his lips and brush of his tongue left her at the edge of her control.

Panting when he drew a breath away, she muttered a protest. He smoothed a palm up her ribs to cup her breast through her clothes.

She arched into the caress, her body starved for tender attention. To her mortification, her eyes prickled. She pushed against him, weak, muscles barely functioning through the haze of seduction.

His lips returned to hers. Moving. Whispering words she couldn’t hope to comprehend. He kissed the single trail of moisture that spilled, still breathing words against her cheek as if he believed they could sink through her permeable skin.

Maybe they could. Her nerves settled as he gentled and soothed her. Something no one else had bothered to do after her parents had died.

His tenderness tore at her senses. He seemed to register that and lingered, giving her the time and space to assimilate the turmoil of her emotions.

Except she couldn’t. It was too big a task—the past a minefield of wounds each more mortal than the last. But maybe she could drown them briefly. In him.

Edie directed his mouth to hers and applied herself to learning every nuance of his response to her. How his breath stopped in his chest when she gently closed her teeth on his bottom lip. The way he groaned when she unbuttoned his shirt and worked her hands into contact with his skin. His chest expanded to meet her touch. He broke the kiss and encircled her wrist, stilling her hands. He breathed a laugh against her cheekbone and shook his head.

Impatience kicked her. She didn’t deserve his tenderness or his care. The thought jolted her. She reflexively shoved it into shadows.

“We’re wearing too many clothes,” she rasped, tugging against his grasp.

He put a finger to her lips.

She looked at him.

A teasing, self-satisfied gleam lit his eyes. “So impatient.”

Heat rushed to her face. She couldn’t hear. How in the hell had he managed to caress those words down her spine with the shapes of the letters on his lips?

“Will you stay with me?” he asked.

He grinned, sending her senses spinning.

She sucked in a heated breath at the sly dig. “Hurry.”

The Claugh Empire attacked Edie’s planet fifteen years ago, murdered her parents, and left the teen for dead. So when a wrecked Claugh starship interrupts a salvage mission, she’s torn between revenge and rescuing survivors—especially the stirring captain with an uncanny ability to rekindle her dead emotions. Something about him inflames the urge to come to terms with her past. But the mercenary in Edie doubts trusting a former enemy will bring her redemption or put old prejudices to bed. When a new common enemy, hell-bent on wiping out humanoids, threatens to bury them all, the captain tries to convince her a mutual coalition might breach their political impasse—all for the greater good.