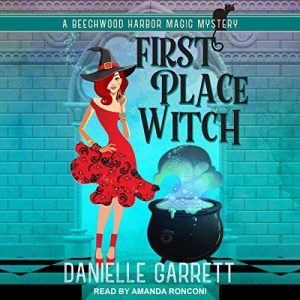 First Place Witch opens shortly after the conclusion of A Royal Witch, on the night before Holly opens her new Potions Shop. She’s stressed because one of the Council members doesn’t think she should have her license, and she worries that he’ll cause trouble. The author catches up on events that have occurred in between the books, like Adam receiving a job offer from the SPA. In addition to her new store, Holly is invited to participate in a televised potions contest (think The Great British Bake Off but for witches), and the whole gang decides to go to San Fransisco to support her. However, when the star contestant turns up dead, and illegal positions are being sold on the black market, the SPA considers Holly their number one suspect.

First Place Witch is one of my favorites in the series. I loved that Adam and Holly acted as a team throughout the story, working together instead of Holly keeping secrets or anguishing over what she wants to do next in her life. While slightly apprehensive over the opening of her new shop, overall she revels in her successes and how good life is. Additionally, they acknowledge the weird stuff that always happens around Holly, but their love is strong and Adam will do anything for her. She is finally content in her life and letting Adam be her equal.

The mystery was a pretty good one, made all the better because Holly and the gang worked together to clear Holly’s name. I liked that Holly didn’t go out of her way to investigate or get involved, yet still got drawn into the case because of who she is and the distrust some of the Counsel has. The only thing is that there were no clear clues to tell us who did it. Holly didn’t really solve the case; she and the gang just happened to be in the right place at the right time.

Narration: As always, Holly and her friends are brought to life through the performance of Amanda Ronconi, who has consistently done a wonderful job. Her interpretation of Holly is always spot on – a bit flustered and frazzled, but with an air of determination – just like Holly. Ms. Ronconi convincingly portrays Holly’s thoughts, concerns, and expressions. Her voices are all well-suited, and she gives paranormals their own fitting voices. However, I noticed that as the cast gets larger, some of the characters started sounding similar, but due to writing, I could usually tell them apart.

First Place Witch renewed my interest in and love of the Beechwood Harbor Magic Mysteries, and I look forward to following Holly and the gang as they move onto the next phases of their lives.

With her potions shop officially open for business, Holly sets off to the San Francisco Haven to compete with the most elite potions masters in the entire country. But what should be a fun and potentially life-changing experience quickly sours when Haven Council officials show up and start poking around Holly’s workstation.

When one of the competitors is found murdered, all eyes swivel to Holly and her apprentice.

Holly doesn’t know who killed the egotistical wizard, but she knows it wasn’t her or Harmony. She also knows that there are some on the esteemed Haven Council who wouldn’t hesitate to blur the lines of the investigation if it means getting rid of her once and for all.

Holly, Adam, Evangeline, and Harmony have to find the real killer before the clock runs out and Holly ends up wearing SPA handcuffs.