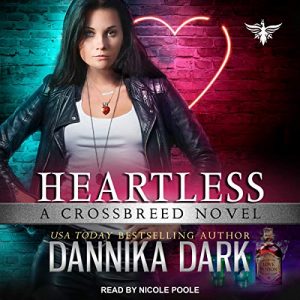 Heartless brings us nine novels deep into Dannika Dark’s Crossbreed series and I’m still in love with the characters and their world.

This time around the Keystone group is working a case where Mage females have gone missing. The clues point to them being taken and used in cage matches. Raven is front and center while she goes undercover as a bartender at the breed fantasy club (think sex club without the actual sex.)

Raven makes contact with the person inside the club who has a connection to the fighting world. She works the fights to get in deeper to find out who is the head honcho.

Keystone brings down another bad guy and Raven works through some of her feelings about the abuse she lived through with her Mage maker. We also get to see her vampire creator, Houdini again. He is very mysterious, and I believe we have not seen the last of him. He’s one of those bad guys you hope to see more of.

I also enjoyed getting Claude’s backstory into Keystone.

Heartless is a solid installment in the Crossbreed series and I look forward to more from Dannika Dark.

I cannot rave enough about Nicole Poole’s narration performance for the Crossbreed series. Poole is the reason Dark is an audio-only author for me. She masterly voices all the characters from the female to the male. Her voice for Christian Poe is perfection.

Despite the spoils of a solid relationship and an idyllic life at Keystone, Raven is itching for the thrill of another big case. Things begin to heat up when a dangerous assignment falls in her lap.

Searching for the mastermind behind an illegal fighting ring is no easy feat, but as the weeks roll by, Raven’s undercover job begins to take an unexpected emotional toll. It’s a deadly mission, and if she’s not careful, she could lose everything.

The stakes are high in this powerful new installment of the USA Today best-selling Crossbreed series.