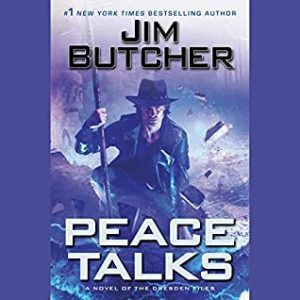 Harry Dresden is BACK! Peace Talks is the first new, full-length story in the Dresden Files series in over five years. For fans of the series – I highly recommend a reread of Skin Game to brush up on events.  The story takes place not long-ish after the conclusion of Skin Game. Right from the opening, Harry is hammered with one situation after another. I don’t want to spoil things for anyone, but I will say that the cards are stacked against Harry, and it looks to me like someone, something, or perhaps even the cosmos itself, is working against Harry.

Peace Talks is the start of an exciting new story arc for the Dresden Files. While all the familiar characters are present, each has his/her/its own challenges, opening all sorts of new storylines. Harry is directly or indirectly involved in at least six new situations, each of which appears to be separate and unique at this point, but I’m certain there is a larger picture; we just don’t have all of the puzzle pieces yet. Most exciting (in a happy way), is the positive movement on the Harry and Karen front – WOO HOO!

I really don’t want to go into much detail because the story is something each reader should experience for themself. It’s a lot to take in, and unfortunately, nothing is resolved by the conclusion of the book. Peace Talks is basically part one of a larger story that will certainly be continued, and hopefully be finished, in Battle Ground. The book ends at a pause in the action, and I am excited to find out where the story goes next. Thank goodness we don’t have to wait long (Battle Ground comes out in September 2020).

Besides so many open plot lines, there are two things that lowered the overall grade for me… First, the real and true conflict doesn’t surface until there are only two hours left in the book (roughly 85% in). As I said earlier, perhaps we will see a pattern in the events, congealing all the parts together, but that is not the case for now. Second, there is a lot of time spent with Harry reminding listeners of facts and previous events. I understand since it’s been several years since Skin Game it may benefit some readers, but for someone like me who just relistened to some of the previous books, it got tiresome. It’s not that I didn’t enjoy the book (because I really did!); it’s just that the story was drawn out in places that probably didn’t need to be, making the book longer than it should’ve been, especially for how it ended.

Narration: James Marsters is Harry Dresden for me. When the audiobook starts, it’s like getting a phone call from an old friend. He captures all of Harry’s verbal mannerisms and inner turmoil. He nails Harry’s sarcasm, but also softens for Harry’s more emotional scenes. The book features a cast of dozens, most of whom we’ve heard over the course of multiple books, and Mr. Marsters manages to keep each voice unique and identifiable from the start. The vast array of voices, both human and other, are distinct and perfectly formed, ranging from a young human child to an ageless demon.

In the end, Peace Talks is a wonderful start to a new story arc for Harry Dresden, and I am thankful we only have to wait two months until Battle Ground drops.

When the supernatural nations of the world meet up to negotiate an end to ongoing hostilities, Harry Dresden, Chicago’s only professional wizard, joins the White Council’s security team to make sure the talks stay civil. But can he succeed, when dark political manipulations threaten the very existence of Chicago – and all he holds dear?