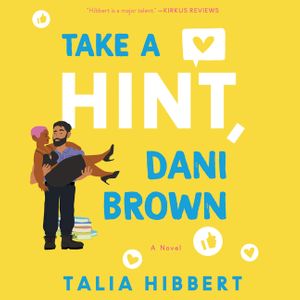 Take a Hint, Dani Brown was one of my most anticipated releases for 2020, and it does not disappoint! I continue to adore Ms. Hibbert’s storytelling, and the book features one of my favorite tropes – fake relationships. Zaf is a retired pro rugby player who keeps a low profile. His brother and father died tragically in an accident, triggering massive anxiety and depression. Now he keeps his past shut firmly behind walls as he runs a non-profit focusing on the mental health of youth athletes. Zaf’s project starts to benefit when a video featuring him carrying Dani out of a building on lockdown goes viral. It benefits even more when the public thinks (assumes) they are a couple.

Dani Brown is wonderful, amazing, and brilliant. She loves her work and research as a PhD student. She knows that she is not built for long-term relationships. So when she asks her goddess to provide her with a new sex-buddy, she takes the hint it’s Zaf, even though he’s a romantic (and a romance novel enthusiast) and never had a fling. Their fake relationship status and immense mutual attraction take them down a path neither expects.

Take a Hint, Dani Brown is both friends-to-lovers and fake relationship, and 100% adorable. Their relationship works first because Zaf accepts and adores Dani for exactly who she is. He knows he’s in love with her early on, but is willing to play the long game. Dani’s been hurt by past relationships, with partners leaving her feeling she is broken or less than. Zaf gives her unconditional friendship and love and Dani doesn’t understand why or assumes its because he’s faking it for the public. But through his friendship and love, she is able to eventually realize she’s perfect as she is AND she is perfect for Zaf.

The relationship also has a chance because Dani views Zaf as a very good friend, and this is how she rationalizes her deeper-than-usual feelings, allowing her to bend some of her hard and fast anti-relationship rules. I love how she is continually surprised by how much she’s in sync with the things Zaf says; it’s like he reads her mind and she doesn’t know what to make of it.

Narration: The second book in the series brings listeners a new narrator, one suitable for Dani’s exuberant personality. The story is shared in the alternating third-person POV’s of Dani and Zaf. Ms. Butler uses a “neutral” female narrator for both POVs, with slight modifications to each characters’ dialogue voices. While it’s always clear who is speaking based on the text, the voices themselves are not all that different from the narrator. She uses slight refinements to make the voices unique and fitting. Overall her voice is pleasing and she adds just enough emphasis and emotion, adding value to the story.

The epilogue is touching because it reminds us that Zaf only wants Dani exactly as she is and he loves all of her. And that Dani wants to do things she normally wouldn’t because she likes to make him smile. They are so lovely together, and Take a Hint, Dani Brown is a wonderful, entertaining, sexy romance.

Danika Brown knows what she wants: professional success, academic renown, and an occasional roll in the hay to relieve all that career-driven tension. But romance? Been there, done that, burned the T-shirt. Romantic partners, whatever their gender, are a distraction at best and a drain at worst. So Dani asks the universe for the perfect friend-with-benefits—someone who knows the score and knows their way around the bedroom.

When brooding security guard Zafir Ansari rescues Dani from a workplace fire drill gone wrong, it’s an obvious sign: PhD student Dani and ex-rugby player Zaf are destined to sleep together. But before she can explain that fact, a video of the heroic rescue goes viral. Now half the internet is shipping #DrRugbae—and Zaf is begging Dani to play along. Turns out, his sports charity for kids could really use the publicity. Lying to help children? Who on earth would refuse?

Dani’s plan is simple: fake a relationship in public, seduce Zaf behind the scenes. The trouble is, grumpy Zaf’s secretly a hopeless romantic—and he’s determined to corrupt Dani’s stone-cold realism. Before long, he’s tackling her fears into the dirt. But the former sports star has issues of his own, and the walls around his heart are as thick as his… um, thighs.

Suddenly, the easy lay Dani dreamed of is more complex than her thesis. Has her wish backfired? Is her focus being tested? Or is the universe just waiting for her to take a hint?

Reviews in the Series:
Get a Life, Chloe Brown by Talia Hibbert (Brown Sisters #1) – Audiobook Review