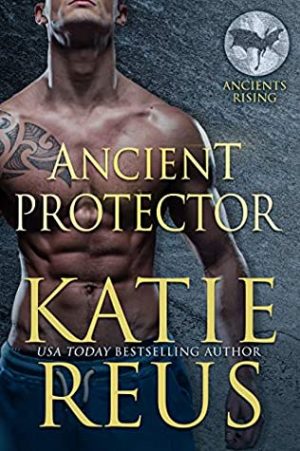 Star is a world-renowned singing sensation with one mission: recover her abducted sister Aurora, who was taken by a devious dragon shifter because he knows the truth of and covets what Aurora is. Once Star and her pack of diverse shifters break Aurora free, they make new lives for themselves in New Orleans.

Lachlan is an ancient dragon, alpha of a clan in Scotland, recently awakened from his hibernation. He bids a million dollars for a date with Star at a celebrity auction and follows her to New Orleans where he intends to woo her and show her he’s a dragon worthy of mating her.

Ancient Protector is the first in a new paranormal romance series; however it is a spinoff from, or rather continuation of, Ms. Reus’s wonderful Darkness series. In the conclusion of the final book in that series, Darkness Rising, the world was turned upside down when dragons fought to dominate the world, killing millions and alerting humans to the presence of supernatural beings. Ancient Protector kicks off the Ancients Rising series with a romance set in this new world, with supernaturals and humans working to rebuild. Ancient Protector works as a first-in-a-series and can be read without having enjoyed the Darkness series.

The romance between Star and Lachlan is a fated mates situation, which is par for the course with Ms. Reus’s world. However, there is a twist (which I won’t spoil) that adds to their story, making it unique. I enjoy that they take the time (albeit short time) to develop a bond and friendship even though they are drawn together. Star is reluctant to trust Lachlan, so he earns her trust, making their connection more powerful and meaningful.

While the story is entertaining, I was a bit shocked at how easily everyone is adjusting only weeks after the devastating events from the previous series. While we don’t ever see the world from a human’s POV, I’m a bit surprised that everyone and everything is pretty good, and the world is not dark or apocalyptic. However, it works for the series, especially if one is not familiar with the previous books. My biggest “issue” is that the author makes us wait until the climatic scene of the book to reveal Star’s “inner beast,” dragging out the mystery to a point that it becomes distracting to the story (and I’d already figured it out).

Overall, Ancient Protector is a promising start to a new series and an enjoyable addition to the Darkness world. This new spinoff looks like it will focus on a new group of characters, but there are several familiar ones, too.

Even as he fights for their future…

With the world still rebuilding after massive dragon attacks, famous singer Star isn’t willing to rely on a stranger to protect her family—though dragon shifter Lachlan is difficult to resist. Something about him is strangely familiar, but she doesn’t understand why. He’s already helped Star rescue her sister from a recent abduction, but trust doesn’t come easy when his kind has nearly hunted her race to extinction. When her sister’s kidnapper launches another violent attack, Star has no choice but to accept Lachlan’s aid. But no matter that he’s stepped up to protect her, she’ll never allow the ancient Scottish dragon into her heart.

They’re bound by the past.

Lachlan lost the woman he was meant to mate millennia ago. Unable to live in a world without her, his pain drove him to hibernation. He never thought he would move on—until Star. He’s well aware the feisty shifter is his new destiny, so if tailing her to New Orleans is what he has to do to be near her, then so be it. When Star is attacked, Lachlan resolves to protect her at all costs. And he won’t have to do it alone. It will take Lachlan, his clansmen, and Star’s misfit band of friends to rain fiery vengeance down upon their enemy if she and her sister are to ever be truly free. Only then can he claim her and discover the shocking truth that lies buried in their past.