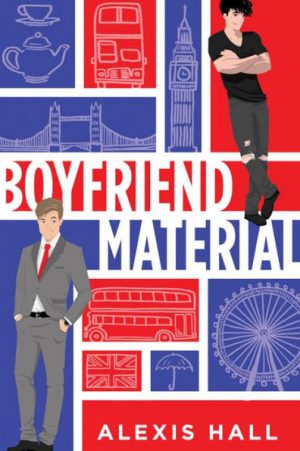 Though I was fortunate enough to receive an advanced copy of this book for the purpose of review, I had so much faith that I’d like it that I preordered it for myself the instant I heard it was being published. And I’m thrilled that I did, because Boyfriend Material is a marvelous gift of a story. Having said that, I had to rework quite a bit of what I’d originally written, since, as has been the case with everything else I’ve read by Mr. Hall, there was more to consider than was initially evident.

On its surface, Boyfriend Material is an absolutely hilarious tale about two people falling in love. I can honestly affirm that I haven’t laughed this hard while reading a story in years. Not just a random snort or giggle, either. I mean the eye-watering, tea-aspirating laughter that’s rare enough to be kind of magical. And laughing that much was so welcome and felt so good that I’m still grateful I was able to have it.

While Luc and Oliver certainly have their share of funny moments together, Boyfriend Material wouldn’t be as wonderful without the vast majority of the additional characters. It won’t even do any good to name my favorites, since the list would just keep growing until I’d included nearly every one. Save for Bridget, who gets a special mention because—she’s Bridget. Still, I thought they were riotously diverting and bright and glorious, and the difference between them and the few that were fairly loathsome was unquestionably stark.

I think what makes the comedic elements even better is that, though they own a significant place in the story, they are never used to trivialize the other matters of the heart the main characters are navigating. Luc and Oliver are so different that there are legitimate reasons to assume their relationship can’t possibly work. Except that it very much does—wonderfully so. Where I believe they’re similar, however, is that their most pressing problem doesn’t seem to be a mutual struggle to love, but to allow themselves to be loved.

Despite having very different histories of hurts and betrayals, the resulting wariness and skepticism was much the same for Oliver and Luc, and broke my heart for them both. Luc’s preferred means of self-defense is to stick to casual sex and be generally and preemptively awful, while Oliver doesn’t seem to do casual anything and hides behind a diligently maintained exhibition of control. Regardless of the catalysts, Luc and Oliver share a certainty that being themselves within a fictitious relationship is safer and therefore preferable to the inevitability of a “real” relationship failing because who they truly are can’t possibly be good enough.

With a completely graceless turn back to the positive aspects of Boyfriend Material, I have to mention that there’s also a delightfully generous reference to Welcome to Night Vale that I literally squealed about and may eventually admit to doing a happy dance over.

I’m always thrilled when an anticipated story not only meets, but surpasses my expectations, and Boyfriend Material did just that with room to spare. Luc and Oliver were an irresistible (if occasionally obscenity-engendering) pleasure, and I ended up thoroughly swoony for them both. Though it wasn’t easy in places, I had a genuinely good time reviewing it and maintain that it was worth every pang of my heart. As much as I appreciated all the different aspects of the narrative (particularly laughing until my back hurt), reading Boyfriend Material made me very happy. I hope it will do the same for someone else.

Practically perfect in every way

Luc O’Donnell is tangentially―and reluctantly―famous. His rock star parents split when he was young, and the father he’s never met spent the next twenty years cruising in and out of rehab. Now that his dad’s making a comeback, Luc’s back in the public eye, and one compromising photo is enough to ruin everything.

To clean up his image, Luc has to find a nice, normal relationship…and Oliver Blackwood is as nice and normal as they come. He’s a barrister, an ethical vegetarian, and he’s never inspired a moment of scandal in his life. In other words: perfect boyfriend material. Unfortunately apart from being gay, single, and really, really in need of a date for a big event, Luc and Oliver have nothing in common. So they strike a deal to be publicity-friendly (fake) boyfriends until the dust has settled. Then they can go their separate ways and pretend it never happened.

But the thing about fake-dating is that it can feel a lot like real-dating. And that’s when you get used to someone. Start falling for them. Don’t ever want to let them go.