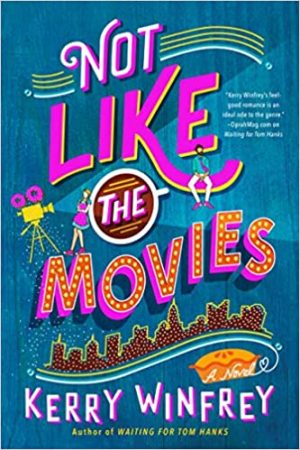 I’m sorry to say that I did not like the second installment in Kerry Winfrey’s Waiting for Tom Hanks series, Not Like the Movies, nearly as much as the first. It’s not nearly as cute or tidy, but then again, Winfrey did warn us right there in the title. The writing is actually good. Unfortunately, Winfrey’s main charachter Chloe Sanderson is a well-written mess. Her emotions, and especially her relationship with love interest Nick Velez, are all over the map. Adding to the confusion, Winfrey added details about her which had nothing to do with the story. One example is that we learn Chloe is bisexual. Since the story is about her hetero relationship with Nick, it’s an entirely irrelevant fact, except that it adds to the confusion of her personality which the reader must endure until she gets her poop in a group. Winfrey also sticks with what I felt was a flaw in the first book and that is using only one POV, Chloe’s. We don’t even get a break from her confusion with someone else’s perspective on the same story.

Nick Velez we like. He’s forgiving and gives Chloe all the space she needs. Maybe too much space. He’s definitely a man in love and we like to swoon over that kind of devotion, but I’m not sure anyone with a healthy sense of self would have waited as long as he did for Chloe to come around. Further, we don’t get to hear his thought process to justify his attachment to a woman who clearly can’t make up her mind or act on it when she does. Instead of the world’s slowest burn, it was more like, “What exactly is going on here?“ Chloe’s hot and cold actions leave Nick equally confused as the reader and hurt on more than one occassion. It’s no wonder he hides in his office a lot.

Adding to Chloe’s chaotic life is a father with dementia, a mother she doesn’t speak to with good reason, a brother who’s a self-centered flake, and a best friend who is preoccupied with planning her wedding thanks to the first book. She’s unquestionably in a tough spot, and I can appreciate a flawed character, but some of it is her own making, and Chloe does a lot of wallowing before she finds a healthier mental and emotional space. Finally, nothing happens in this story so much as Chloe resolves her issues. It kind of teeters on falling into the afflicted women’s fiction genre since it’s light on romance, but at least holds onto a sense of humor.

Chloe Sanderson is an optimist, and not because her life is easy. As the sole caregiver for her father, who has early-onset Alzheimer’s, she’s pretty much responsible for everything. She has no time—or interest—in getting swept up in some dazzling romance. Not like her best friend, Annie, who literally wrote a rom-com that’s about to premiere in theaters across America… and happens to be inspired by Chloe and her cute but no-nonsense boss, Nick Velez.

As the buzz for the movie grows, Chloe reads one too many listicles about why Nick is the perfect man, and now she can’t see him as anything but Reason #4: The scruffy-bearded hunk who’s always there when you need him. But unlike the romance Annie has written for them, Chloe isn’t so sure her own story will end in a happily-ever-after.