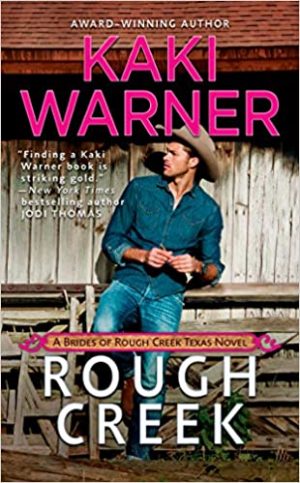 I would like to start by saying I am a big fan of Kaki Warner. I have been reading her historical fiction for years and if you look at past reviews you will see overall I really enjoy them. Ms. Warner tends to beautifully balance a great story with the perfect amount of adventure and history.  So when I learned Ms. Warner was dipping her toes into the world of contemporary fiction I was excited to see what she’d do with it. Unfortunately, I was completely let down by Rough Creek. The novel had TONS of potential; a great location set up for wonderful scenery descriptions, fun characters, family issues and a lovely heroine paired with a handsome hero who’s trying to make a new life despite a past, but none of these things gave the novel enough life to carry my interest.

I tried, I really did, but the novel spent more time explaining horse husbandry, horse showmanship, and ranching that the story was completely lost.  It never even really gave me a chance to get to know Raney and why she has the MASSIVE trust issues she has. We are given one real story, and yes, it was a major life altering event, but it should not have discolored her to the point that she refuses to trust anyone. Overall, her life has been one of love and privilege, and yet she actively pushes people away. I was told more about her little sister’s life and love affair and her older sister’s troubled marriage than I was Raney’s life, and she’s the heroine. I have a feeling she’s a likable enough character, but I hate that I never really got to see who she was.

Dalton was well written as a strong male lead; all honor and loyalty, refusing to give up or betray those he loves, and I did get to understand him more than Raney. However, there were definite holes in his story too or maybe to put it more accurately there were holes in THEIR story. He knows that falling for the Boss is a bad idea but never really stops himself, which felt strange given his earlier issues. For someone with so much discipline in other areas of his life, he seems to have none when it comes to Raney, and I feel like that was out of character for him. Maybe had I seen more of an internal struggle I’d understand better but that was never shown to me.

Although the secondary characters were complex and added color and humor to the story, overall I felt like the writing was lackluster at best. Even the love making scenes were weakly written. I understand that authors can struggle to decide how to depict these scenes but I feel it is important to commit to writing them well, either tease the audience with a well placed kiss, a dropped robe, and the couple waking up together or put the audience right in the middle of it but commit one way or another, Ms. Warner didn’t even do that and I know she’s capable of doing both, I’ve read it in her previous works.

All in all, I was really bored and disappointed in Rough Creek; I know this is the first in a series about the Whitcomb sisters, and I also know this was the first time Ms. Warner has attempted contemporary romance writing, so I’ll give her the benefit of the doubt and read the next one in the series to see if things improve. But I can guarantee that if it reads anything like Rough Creek I won’t finish it, let alone continue with the series, which makes me really sad because like I said I really like Ms. Warner’s books. Maybe she’s better suited to historical romance; I guess time will tell.

My Rating: C- Finished It – Liked a little, didn’t like a lot

After serving eighteen months in prison for a crime he didn’t commit, Dalton Cardwell is looking for a fresh start. What better place than Whitcomb Four Star Ranch? He doesn’t regret the decisions of his past–he’d choose the same roads again. But now all Dalton wants is to keep his head down and focus on the horses–and on Raney Whitcomb.

Raney is outraged when she learns her mother hired an ex-con. Raney has worked hard for the ranch, sacrificing her personal life for the dream of building on her family’s legacy. But as Dalton breaks down every misconception and even wins the good opinion of her sisters, Raney is forced to rethink her stance–and finally free herself to explore the heart-pounding tension that simmers between them.