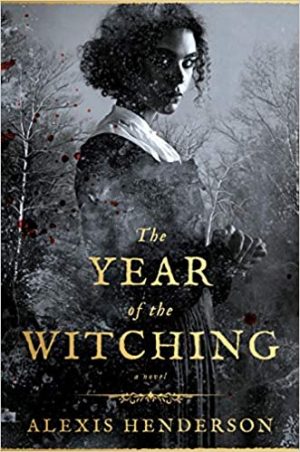 The Year of the Witching
Author: Alexis Henderson
Reviewer: B.
Rating: B+

Born an orphan and an outcast, seventeen-year-old Immanuelle Moore has never known anything outside of Bethel. As the child of a Bethelan mother accused of witchcraft and an Outskirter father who was burned at the stake, she wears the shame of her conception in her skin, and the guilt from her remaining family’s acceptance in every other facet of her existence. Determined to avoid the cruel attentions of the Prophet and his Apostles, she spends her days tending her flock and saying her prayers—at least until an accidental journey through the Darkwood shows her a future more terrifying than she ever imagined.

Even though this genre isn’t one I typically read, I couldn’t help but request this title for review after hearing so much about it. As it turns out, I’m glad I did. Given how meticulously The Year of the Witching plays out, it’s clear that Alexis Henderson hasn’t just dipped her toes in her subjects, but cannonballed into the deep end with impressive and thought-provoking results.

To say that, for a debut novel, The Year of the Witching has got a lot going on is a comical understatement. Confronting the justifiably and reliably contentious topics of theocratic despotism, gender inequity, racial diminishment, and more, it examines the heroism of one young woman who finds herself not only the epicenter of the apocalypse, but the genesis of a new world.

While its most evident—if oversimplified for the purpose of review—conflict is the use of “sin” in the subjugation, scapegoating, abuse, and eventual destruction of women at the hands of powerful men, The Year of the Witching is also propelled by many other, more subtle considerations. One example I noticed was that some of Imanuelle’s interactions illustrate competitiveness as a fundamental human trait, yet it is exercised differently based on condition rather than gender. There are many others, as well, but I think every reader is likely to see something different.

The Year of the Witching is a well-written, diligently crafted debut by an author that I’d very much like to see more from in the future. While the story is at once captivating and suspenseful, there are significant lessons to be learned and histories it would be foolish to ignore. Whether a warning about self-anointed saviors with no accountability, an exploration of the parasitic nature of absolute power (and the unconscionable cost of satisfying it), or calling out the pitfalls of tolerating the currency of guilt and forgiveness, The Year of the Witching doesn’t flinch.

In the lands of Bethel, where the Prophet’s word is law, Immanuelle Moore’s very existence is blasphemy. Her mother’s union with an outsider of a different race cast her once-proud family into disgrace, so Immanuelle does her best to worship the Father, follow Holy Protocol, and lead a life of submission, devotion, and absolute conformity, like all the other women in the settlement.

But a mishap lures her into the forbidden Darkwood surrounding Bethel, where the first prophet once chased and killed four powerful witches. Their spirits are still lurking there, and they bestow a gift on Immanuelle: the journal of her dead mother, who Immanuelle is shocked to learn once sought sanctuary in the wood.

Fascinated by the secrets in the diary, Immanuelle finds herself struggling to understand how her mother could have consorted with the witches. But when she begins to learn grim truths about the Church and its history, she realizes the true threat to Bethel is its own darkness. And she starts to understand that if Bethel is to change, it must begin with her.