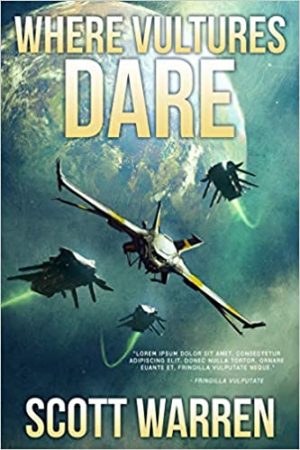 Fans of Scott Warren’s Union Earth Privateers series will definitely enjoy Where Vultures Dare. It has all the hallmarks of Warren’s earlier books that made them worth the reader’s time. They are thick with details and action. In Where Vultures Dare the action is split between space dogfights and underground warfare. Warren continues to draw on his experience as a pilot to write authentic feeling battles.

I especially like that he celebrates the human spirit to never give up when to cut and run is the most logical choice. He writes beautifully of sacrifice, avarice, compromise, and greed, all the human emotions which make us uniquely human.

My one criticism is that Where Vultures Dare is billed as the close of the “first trilogy.” It didn’t read like the close of anything to me. In fact, it referred very little to book two, To Fall Among Vultures, the book I felt was the best in the trilogy, and opened several more lines of sub-plot. Having read all three books now, it feels more like the entire trilogy is the introduction to what I assume will be the next series. It doesn’t provide any kind of closure or complete any of the story arcs. Don’t read this installment expecting satisfaction, rather read it in preparation for what’s next. It is my hope that Warren will delve into the questions and speculation of book two. That is the fun to me of science fiction—the possibilities, not just the fight to survive in a hostile universe.

In the aftermath of the Union Earth’s betrayal of the Maeyar Empire, Victoria and her Vultures are recruited for a dangerous mission. At the fringes of Union Earth territory, the Director of the UE’s clandestine Technical Division has gone missing and an entire colony world has fallen silent.

Vick and her crew dare to mount a recon-and-rescue attempt to recover the scientists and, more importantly, the secrets they guard. The Vultures must face new threats, friends turned to enemies, and will become the only force standing in the way of the alien predators hunting for Earth, eager to destroy all of humankind.