A Touch of Stone and Snow 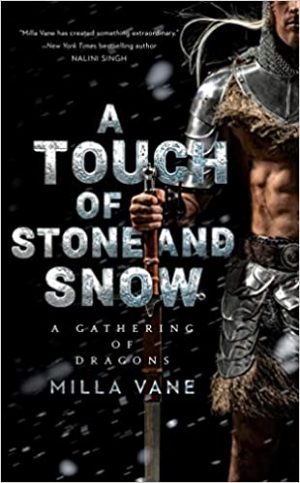 How had her story with Aerax begun? Of late, Lizzan had not thought of the beginning much. Only of how it had ended.

Suddenly she was desperate for a drink. Anything to dull the razor’s edge of remembering all that was lost as she told the fisherwoman, “It began with the two of us becoming the finest of friends—though we wanted to be more than friends. Wanted so badly. But my parents warned us it would only end in hurt.”

“Because of his rank?” the fisherwoman asked.

“Because he had no rank. Nor even a name. He was a bastard born without acknowledgment—and he hated Koth.” He hated everything his father was, and how the law allowed a person to be treated as nothing, for no other reason than by accident of his birth. “He stayed only for his mother. But always he planned to leave. And me . . . for as long as I could remember, my only wish was to become a soldier and protect the people of the realm. So when he asked me to go with him, I told him it was my duty to stay—and then I tried, so very hard, not to love him as anything more than a friend. And he tried the same. So that when the time came for him to leave, it would not hurt so much.”

“Oh, it did.” Lizzan laughed at the memory of how tormented she’d been . . . and how young she’d been. “So much. And even as I was packing my things to leave with him, he decided to stay—though it would still not be easy. His name was not written in the books. If it was discovered how close we were, I would have been expelled from the army. But there was talk among the nobles and councilors of doing away with the books, so we thought . . . maybe soon, all would be fine. So we pledged ourselves to each other. Yet not even a tennight passed before the red fever came and killed near to half of those living on the island.”

“You lost him?” the fisherwoman asked gently.

“Not to the fever.” Though Aerax had lost his mother. And Lizzan had lost her mother’s parents, healers who’d tended to those stricken with the disease and succumbed to it themselves. “Nearly every member of the royal house was dead—the king and all his heirs, and so many others. All that remained were the king’s brother, the brother’s young daughter . . . and Aerax. You have heard of Koth’s snow-haired kings?”

The woman nodded. “That they are descendants of the man-god, Varrin.”

“They are. And legend is that Koth will sink if none of his heirs stands on the island. So the king never leaves Koth until he takes the King’s Walk at the end of his life. And always, always, there is someone of at least a queen’s age ready to step into the role. Aerax was barely more than half that age, yet they had little other option. The princess had not even seen three winters yet. So they wrote Aerax’s name in the books and he began his lessons about how to be a Kothan prince.”

“And now his rank stood between you?”

“Not truly.” Not an insurmountable obstacle. “I could rise through the army’s ranks, become a part of the high command—as my father was. It would only take time and effort, and was no different from what I’d always intended to do. And the way the red fever had torn through the soldiers’ barracks . . . it was said the Destroyer had come at last. So there was no shortage of work.” She had passed a full winter simply clearing houses of bodies. “And that was the true obstacle—how much work there was to do. I bore the duties of two or three soldiers, so it was near summer before I met with Aerax again. But . . . all had changed. He had changed.”

Chest aching, Lizzan lifted her shoulders in a helpless shrug. She did not know. She still did not know. “There was . . . a distance between us. Never before had there been. And he seemed so very troubled. But when I asked what I could do to ease whatever he suffered, he said there were royal secrets to keep and he now bore burdens that I wouldn’t understand.”

The fisherwoman sucked in a breath through her teeth. “And you did not slice him open there?”

Though it hurt, Lizzan laughed. “I forgave him. I thought it was grief for his mother and his resentment at being trapped in a role that he’d always despised.”

Again Lizzan gave a helpless shrug. “He never told me—and I had little time to dwell on it. There was so much to do. Marauders plagued the forests beyond the lake, there were tales of howling terrors and bramble beasts, and it seemed that my soldiers and I were always chasing after enemies that simply disappeared. And the number of soldiers we had was still so few. Dangerously few. But I still did not think that . . .”

“You would lose?” the woman said when Lizzan’s voice faltered.

“None of us believed so. There were but fifty bandits who threatened to cross the King’s Walk. It was laughable. But the army’s high command thought it a fine time to give the bandits’ leader a demonstration—and it was an opportunity for a promotion for me. Already I was a captain in charge of a company of soldiers. So I was to be tested, and my performance observed by all in high command. And it was a fine night for it. Cold and clear, the moon full. The first snow of the season had fallen during the day, so against all the white, nothing could move without us seeing it. So we saw the bandits coming.” Lizzan paused on a hot, shuddering breath. “We did not see what came from behind us.”

“Wraiths, I think.” Made of ice, and with fingers like knives. With her own trembling fingers, Lizzan touched the scars on her face. “They tore apart my father, my friends . . . the bandits. I fought, until I could fight no more. The next morning, it was Aerax who found me amid all those who’d fallen.”

With his bloodbare face as white as his hair, until she’d breathed his name and he knew she still lived.

“Aerax is the finest of hunters; he can track anything.” But that morning, he’d likely had help from Caeb. “He took me to the palace, and there the questions from the councilors and the king’s court began. I did not right away see where those questions were leading.”

“To the first story you told me?”

“And I, a coward who deserted my soldiers,” Lizzan said dully. “They said I panicked and imagined the attack from behind. They said Varrin’s protection meant that a wraith could never haunt the island. They said either I was of unstable mind or I was a liar. Then I was exiled and my name was struck from the books.”

“So no one could speak to you?”

“Or ever speak my name. Or acknowledge that I ever lived. But I did not care about that. Aerax had survived without a name written; so could I. Yet my family . . . they would bear all the shame that the people were not allowed to heap onto me, for I was not even supposed to exist. Execution would have been a better end, for at least then my name would be written in the books again, because you cannot execute someone who does not exist.” She scrubbed at her eyes with the heels of her hands. “In truth, I expected death. But exile suited me. I was so angry. And not quite ready to die. So I left and will never return.”

Milla Vane returns to a world of kings, magic, and passion in her exhilarating A Gathering of Dragons series, as a great alliance forms to stand against an evil warlord intent on their destruction.

Though they were childhood friends, Aerax cannot allow himself to be close to the only woman who might thwart his treacherous plan to save their island realm. But when a goddess’s demand binds them together, Lizzan and Aerax must find a way to overcome their painful pasts. Or there will be no future for the western realms…