If the Sun Never Sets

Get a peek at If We Ever Meet Again (click), the first book in the If Love Duet series. 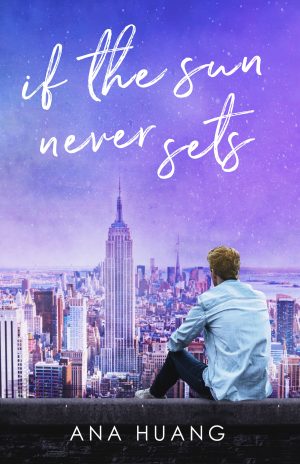 It’d been five years, and God, she was even more beautiful than he remembered. More sophisticated and self-assured. Time had sculpted her features into a masterpiece, and her slim figure had blossomed with curves. She was no longer a girl but a woman—one who sent desire curling through his gut even as his heart ached.

Farrah, on the other hand, hadn’t so much as looked at him since he sat down.

“So.” Landon filled the silence. “Farrah, as I mentioned in our call, Blake is looking for a designer for his new condo. Two bedrooms, two baths, in the West Village. It’ll be his primary residence from now on, so he needs someone to spruce it up. Make it feel like home.” He nudged Blake. “Right?”

Get your s**t together, man.

“Right.” Landon’s gaze ping-ponged between Blake and Farrah. “About the compensation. Since this is so last minute, Blake will pay twenty percent above—”

“I can’t do it.” Farrah’s quiet refusal brought the conversation screeching to a halt. She kept her focus on Landon as she explained, “I’m sorry for wasting your time. I appreciate you thinking of me, and I’ll pay you back for this meal. But I just remembered I have, um, another project I need to work on, and I won’t have time for this. In fact, I should probably—”

Farrah stiffened at Blake’s offer. “What?”

“I’ll pay you double your rate if you agree to work with me.”

Farrah’s gaze slammed into his. Her eyes smoldered with disbelief, and Blake couldn’t fight the small grin of victory on his lips. Finally. A reaction.

“You don’t know how much my rate is.”

“I’ll pay you $900 an hour. But it has to be exclusive. You’ll work only on my apartment for the duration of our contract period.”

Across the table, Farrah’s lips parted with shock.

$900 an hour was a s**t ton of money, but Blake could afford it. He wasn’t as rich as Landon, but thanks to both Legends’ success and a slew of smart investments over the years, he had enough of a financial cushion to absorb the cost. Besides, he didn’t care about the money. He cared about Farrah.

He’d bitten the bullet and asked Sammy for her number over the weekend. Sammy had been wary of Blake’s sudden desire to reconnect with her but being the good friend he was—as well as the only one in their old Shanghai group who knew the truth about Blake’s feelings for Farrah and what happened with Cleo—he’d relented.

Blake had stared at the ten digits all weekend, trying to work up the courage to call her. He’d chickened out every time, but now here she was, right in front of him.

It was like the universe had tired of his waffling and given him the kick in the ass he needed.

Of all the designers in all the world, she was the one Landon invited here.

Two people in a city of eight million, reunited against all odds.

Farrah was the one who’d taught Blake to believe in fate, and like everything else about their relationship, he’d carried it close to his heart all these years.

“Do we have a deal?” Blake kept his tone even, but inside he was a chaotic storm of need and emotions.

Say yes. God, if she says yes, I will never ask you for anything else ever again. Except maybe for a team other than the Patriots to win the Super Bowl, but I’m willing to negotiate on that front.

Farrah fiddled with her necklace while indecision flickered across her face. After an eternity, she bit out, “Yes.”

Blake released his breath and sent a quick thank you up to the heavens.

“It’s a deal.” He grinned, revealing his trusty dimples in all their glory, and held out his hand.

After a brief pause, she took it.

A current of electricity sizzled through his body the second they touched, and judging by the way Farrah’s nostrils flared, he wasn’t the only one who’d felt it.

The universe had handed him his second chance on a platter, and this time, there was no way in hell he was going to f**k it up.

Five years ago, he broke her heart. Now, he’ll do anything to win her back.

When Farrah walked into her lunch meeting, she didn’t expect to see him.

Blake Ryan.
Her first love.
Her first heartbreak.
And now, her first client as a freelance interior designer.

Not again.
Not ever.

Money. Looks. A booming sports bar empire.
On the surface, Blake has it all.
But inside, he’s haunted—both by nightmares of a tragic loss, and dreams of the girl he once betrayed.

When fate reunites them, he sees it as a sign:
It’s time to get the love of his life back.
No matter what it takes.

If the Sun Never Sets is book two of the If Love duet. It’s a steamy, angsty second chance romance with plenty of groveling and an HEA.

*Ebook is in Kindle Unlimited; paperback is available everywhere

Besides reading and writing, Ana loves traveling and learning about new cultures. She majored in international relations and her travels often inspire her story settings. For example, her novel If We Ever Meet Again was inspired by her own study abroad adventures in China.

Ana lives in New York, where she prefers cafe-hopping, exploring the city’s hidden gems, and binge-watching Netflix with a pint of Ben & Jerry’s over taking advantage of the city’s nightlife. She doesn’t drink coffee (!) but absolutely lives for matcha and chai lattes.