If We Ever Meet Again 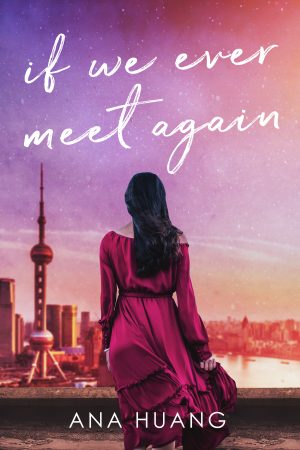 “Ow!” Farrah had been so absorbed in her design daydream she slammed into the wall. Her hand shot to her forehead as pain ricocheted through her brain. Fortunately, she couldn’t feel a bump.

Olivia’s bubble tea also remained intact, thank god. She was scary when she didn’t get her sugar fix.

A walking, talking wall. She must’ve hit her head harder than she thought.

Farrah peeked out from beneath her hand and found herself staring into a pair of crystal blue eyes. She recognized those eyes. They’d stared back at her from the cover of Sports Illustrated last year, along with the accompanying high cheekbones and cocky grin.

Now, they examined her with a mix of amusement and concern.

“No, I’m not.” The not-a-wall cocked an eyebrow. A hint of a smile played over his lips. “I’ve been called a lot of things in my life, but that’s a new one.”

Farrah fought the flush of embarrassment spreading across her face. Of all the people she could’ve run into, she had to run into Blake Ryan.

Even though she wasn’t a sports fan, she knew who he was. Everyone did. A hotshot football player from Texas who caused a national uproar when he quit the team at the beginning of the year. Besides the Sports Illustrated cover, Farrah remembered Blake from an ESPN documentary about the most talented college athletes in the country. Farrah’s roommate last year forced her to watch it because she was obsessed with the point guard on CCU’s basketball team, and she needed someone she could gush to.

It’d been the most boring seventy-five minutes of Farrah’s life, but at least there’d been plenty of eye candy, none of whom were dishier than the Texan standing in front of her.

Six feet two inches of tanned skin and chiseled muscle, topped with golden hair, glacial blue eyes, and cheekbones that could cut ice. He wasn’t Farrah’s type, but she had to admit the boy was fire. Blake looked the way she’d pictured Apollo looking when she learned about Greek mythology in seventh grade.

“Well, you’re really hard.” The words slipped out before Farrah could catch them.

I did not just say that out loud.

The flush traveled from her face to the rest of her body. No matter how hard she prayed, the floor didn’t open up and swallow her whole, that bastard.

Blake’s other eyebrow shot up.

“I mean, your chest is really hard. Nothing else. Although I’m sure it could be hard if it wanted to.”

One year, two opposites, and a love that will blindside and, ultimately, shatter them.

She’s an aspiring interior designer who dreams of falling in love.
He’s an ex-football star who thinks love is a con.

She’s a virgin, and he doesn’t do virgins.
He’s cocky, infuriating, and not her type.

She wants the fairytale.
He wants freedom.

Blake and Farrah shouldn’t have fallen for each other the way they did: totally, completely, and irrevocably.

Because they’re studying abroad in Shanghai, and they only have one year.

Because forces at home threaten to rip them apart, even if they don’t know it yet.

And because, eventually, they must face the most heartbreaking lesson they’ll ever learn: sometimes, even the greatest love can’t conquer all.

Warning: This is the first book in a duet. It’s a full-length novel with no sudden cliffhangers, but Blake and Farrah’s story continues in book two, If the Sun Never Sets (due out July 2020), which takes place five years later. HEA guaranteed in book two.

Besides reading and writing, Ana loves traveling and learning about new cultures. She majored in international relations and her travels often inspire her story settings. For example, her novel If We Ever Meet Again was inspired by her own study abroad adventures in China.

Ana lives in New York, where she prefers cafe-hopping, exploring the city’s hidden gems, and binge-watching Netflix with a pint of Ben & Jerry’s over taking advantage of the city’s nightlife. She doesn’t drink coffee (!) but absolutely lives for matcha and chai lattes.