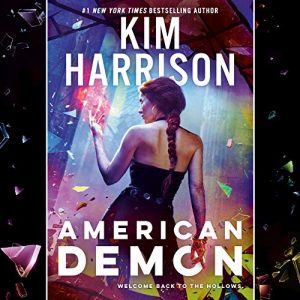 It took me several chapters to get that future out of my head because at this point Rachel and Trent aren’t even living together. When I did a relisten of The Witch With No Name I made sure I didn’t listen to the last chapter because I had read a few reviews saying the story for American Demon takes place before that chapter. But once you’ve read something you can’t unread it.

Once I got out of the mindset of the timeline being backed up I settled into the story and it felt like classic Rachel. After Rachel and the gang helped freed the demons, broke the old Everafter, and somewhat helped the vampires with their soul issue, they are dealing with the fallout.

The world sees Rachel as a demon and they don’t really like her or the few demons living out of the closet. Landon the douchy elf, who tried to kill the vampires and demons, is still around and he is taking credit for all the things Rachel and Trent did to fix things.

All in all, American Demon is the 14th book in the Hollows series, it only took us six years to get it. The world is still the same as Harrison created and the characters are the same. We get a new character who we’ll have to wait to see if he is friend or foe. Rachel and the gang are learning to adjust to the changes in their lives and relationships. It’s like they have graduated high school and learning what college life could be like.

Now that I’m back into the world and characters I hope we get a few more books. I also hope Harrison gives is more books from the Turn spinoff about Trent’s parents. They are mentioned a few times in American Demon.

Marguerite Gavin brings her usual A-game to the narration. I was happy she returned with American Demon. It would be all wrong with a different narrator bring these characters to life.

Rachel Morgan is back – and the hollows will never be the same.

What happens after you’ve saved the world? Well, if you’re Rachel Mariana Morgan, witch-born demon, you quickly discover that something might have gone just a little bit wrong. That the very same acts you and your friends took to forge new powers may have released something bound by the old.

With a rash of zombies, some strange new murders, and an exceedingly mysterious new demon in town, it will take everything Rachel has to counter this new threat to the world – and it may demand the sacrifice of what she holds most dear.