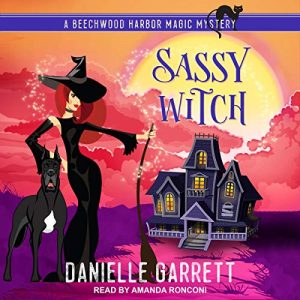 Picking up a few months after the conclusion of the previous book, Sassy Witch opens with Holly and best friend Cassie organizing a Valentine’s Weekend Singles event in Beechwood Harbor. And because nothing ever goes smoothly for Holly, vampires show up at the event, which is followed by the deaths of a few male participants the following mornings. Add to that, Cassie not feeling well, leaving Holly with a lot of the work, and the SPA evicting the Manor residents because they are turning it into an inn for supernaturals.

Sassy Witch is another wonderful story in the series and may be my favorite yet. Like the previous book, First Place Witch, I love that Adam and Holly function as a team throughout the story, working together instead of Holly keeping secrets or anguishing over what she wants to do next in her life. They are engaged and looking for a new place to live, and instead of keeping their fears and hopes to themselves, they talk and share – it’s so great to see them go through the ups and downs together.

The mystery is an excellent one this time around. The whole gang works together to figure out who is behind the murders of the human participants. There are many layers to the story, including issues at SPA headquarters, unrest with the Vampire Council, and the local human sheriff (and good friend) putting pieces of supernatural activity together. (This last one is most worrisome because humans are not supposed to know about the supernaturals.) The story is richer for the layers, leaving me wondering until the end exactly what is going on. Additionally, the story opened up potential new avenues for future books and story arcs.

Narration: As always, Holly and her friends are brought to life through the performance of Amanda Ronconi, who has consistently done a wonderful job. Her interpretation of Holly is always spot on. Ms. Ronconi convincingly portrays Holly’s thoughts, concerns, and expressions. Her voices are all well-suited, and she gives paranormals their own fitting voices. However, I notice that as the cast gets larger, some of the characters start sounding similar, but due to writing, I can usually tell them apart. My favorite standout this time around is the performance of Justine, a local human resident. In one scene in particular, she is crying and it is so genuine; not fake sounding and forced. Well done.

Sassy Witch is a wonderful addition to the Beechwood Harbor Magic Mysteries, and I look forward to following Holly and the gang as they move onto the next phases of their lives.

The winds of change have arrived and Holly’s not sure she can fly.

It’s Valentine’s Day in Beechwood Harbor and the town is rolling out the rose-colored carpet to host a group of eager singles in an effort to boost town tourism. The sleepy town is suddenly transformed into Cupid’s playground, complete with chocolate fountains, bicycles built for two, and a romantic breakfast buffet.

Of course, no one loves a singles’ buffet quite like a pack of vampires. Only, they’re not there for the dark-roast coffee and homemade sticky buns.

In short, it’s a bad time to get an eviction notice.