Audiobook review: To Kill a King by C.S. Wilde 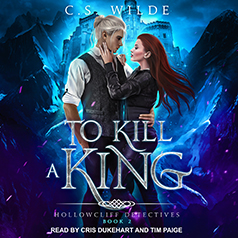 To Kill a King is the second book in the Hollowcliff Detectives series, and I strongly recommend starting with the first book, To Kill a Fae, for world-building and character introduction and development. This one takes place shortly after the conclusion of the first book, picking up with Detectives Mera and Bast looking into the death of Bast’s father, the Night King, by returning to his homeland. The bulk of the story is spent investigating murders happening in the Night Court, but we also see story progression on a potential romance between the two main characters as we learn more about both characters’ pasts.

One of my wishes after listening to the first book was to hear Bast’s POV to balance the romantic aspects of the story, and to my delight… my wish was granted! The story actually opens with Bast’s POV in the past. Through these interludes, we learn more about how he went from an assassin in the Night Court to a Hollowcliff detective. It’s similar in how the author gave us glimpses of Mera’s past in the first book. The story is still dominantly shared via Mera’s POV until the last third of the book when Bast’s POV sections are set in present time when we get a balance of the two POVs. We do learn more about Bast’s feelings for Mera (which are way more than he let on in the first book). There are a couple of sexy-times, but I was put off by some of the terms used like “nether regions” and “bum;” the somewhat childish language made it almost goofy.

I enjoyed the mystery of who killed the Night King. Even though Bast was on a tear to prove his brother guilty of the crime(s), I liked how Mera remained open-minded and worked to keep Bast’s emotions out of the investigation. It was pretty obvious to me who it wasn’t, but I wasn’t certain who did do it (or why). The conclusion of the mystery and book is fitting to the storyline and I enjoyed it.

To Kill a King somewhat continued the overarching plotline involving Mera’s mysterious father, Poseidon. There are hints that something bigger is coming, and in the conclusion of the book, Mera and Bast seem determined to puzzle out that unknown mystery.

Narration:  The story is shared via the third person POVs of Mira and Bast. Ms. Dukehart, who narrated the first title, does a good job representing Mera, capturing her drive and emotions. I appreciate the way the narrator separates the dual natures of Mira: her human and siren. Ms. Dukehart changes tone and voice for dialogue, making it appropriately deeper for males. I didn’t notice a huge difference between characters of the same gender, but enough for distinction and to keep it interesting. Mr. Paige performed all of the sections shared from Bast’s POV. I liked having a male narrator for these sections, and his tone, speed, and cadence are fitting.  However, his performance is very dramatic… he infuses a lot of emotion into the characters, but it’s a bit over the top. It made Bast almost appear to be whiny, which he isn’t. I also did not like his voices for female and child characters. They are lighter and more feminine (or childish), but almost to the point of being shrill.

Overall, To Kill a King is a pretty good second book with more world building and plot momentum. I liked getting the dual POVs, learning more about Bast and the Night Fae, and that the focus was more on the murder and the connections developing between Bast and Mera. While I felt that there is still some immaturity in the writing, it is an improvement from first book, and I enjoy the direction of the series.

My Ratings
Story: B-
Narration:
Dukehart: B
Paige: C/C-

The Night King is dead, and his killer is on the loose.

When Mera Maurea goes to Lunor Insul to investigate the Night King’s murder, she knows bringing her partner Sebastian Dhay is a mistake, mostly because he’s the victim’s freaking son.

Things would be a lot easier if Bast’s relationship with his four brothers wasn’t so… explosive. As the culprit keeps attacking the Night Court, Mera and Bast will have to catch him before all remaining Dhays are dead.

Everything is connected, and solving this case might just bring Mera closer to Poseidon.