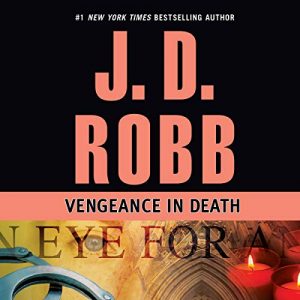 Just when I thought Roake was never going to be connected to a murder case again. Vengeance in Death brings a case of murders where the victims have a connection to the torture and murder of Summerset’s daughter back in Ireland years ago before he and Roake came to the U.S.

With each murder, Eve has to work harder to figure out who the killer is while proving Summerset is not on the top of the list of suspects. As the full story goes out about his daughter’s murder, it’s easy to see why Summerset has disdain for cops. I feel like Eve and Summerset’s relationship may have grown stronger during this case.

I highly enjoyed Vengeance in Death and getting a closer look at Eve, Roake, and Summerset’s relationships. They seem more like a family unit now that everything is out in the open. Plus it doesn’t help that Eve saved the old man’s butt.

Susan Ericksen keeps knocking the narration out of the park. The next two stories I’ll have to read since I bought the paperback of Holiday in Death and Midnight in Death is an e-novella.

He is an expert with the latest technology…a madman with the mind of a genius and the heart of a killer. He quietly stalks his prey. Then he haunts the police with cryptic riddles about the crimes he is about to commit – always solved moments too late to save the victims’ lives.

Police lieutenant Eve Dallas found the first victim butchered in his own home. The second lost his life in a vacant luxury apartment. The two men had little in common. Both suffered unspeakable torture before their deaths. And both had ties to an ugly secret of 10 years past – a secret shared by none other than Eve’s new husband, Roarke.