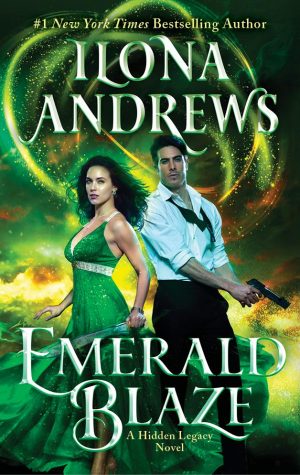 Emerald Blaze picks up with Catalina Baylor’s life six months after conclusion of previous book, Sapphire Flames. She’s been working cases for the detective agency, settling into her role as the Deputy Warden, keeping her House and family safe, and getting over her heartbreak after Alessandro’s departure. However things get extremely complicated and dangerous when a case that holds the interest of the National Assembly crosses paths with Montgomery Investigations and Alessandro, and soon Catalina and Alessandro are working together under a deadly conditions.

Once again, the writing team of Ilona Andrews just blows me away. Although Emerald Blaze is the fifth story in the series, it is fresh, unique, and exciting! The amount of details poured into the story are fabulous. From the creation of and continued character development, to the detailed action scenes. The action is face-paced and the quiet moments are emotional. The story pace flows seamlessly from zero to sixty, back down to ten and then up to 100 mph, never missing a beat or sacrificing quality storytelling.

While it’s not the central plot line, the romance between Catalina and Alessandro is critical to their development and is simply wonderful. We learn that she was utterly crushed after he left without saying goodbye, that there were many dark moments (and Leon threatening to kill him should he return). Yet when Catalina is suddenly forced to work with Alessandro, she handles it gracefully, but doesn’t let him get away with anything. She recognizes right away that he’s changed, and she wants to make sure he’s okay. She challenges him and he meets her. He’s there for her, and together they open to new possibilities, even though the promise she made to her grandmother will keep them apart. There is a tender scene Catalina and Alessandro share that stopped my heart. The intensity of the moment, the realism of the raw honesty; the love story just works so beautifully.

The action storyline of Emerald Blaze is standalone, but ties in the events that started with the previous book. We learn more about the group behind the warped magic users and stolen/missing Osiris serum and the person Alessandro is hunting. The action is intense, but it doesn’t overpower the story. There is violence, but it isn’t gratuitous. And, I just love how whip smart Catalina is. She’s not winning because of luck. To some degree it’s her magic, but she’s so smart, thoughtful and cunning… much like her despised grandmother. The end of the book has a couple shocking moments that will leave readers on edge and impatient for the next book.

Emerald Blaze is a wonderful story!  I love the evolution of Catalina and Alessandro – both individually and as a couple. They have had to deal with so much and they do it with such grace.  And with the way things ended… I cannot wait to dive back into this amazing series.

As Prime magic users, Catalina Baylor and her sisters have extraordinary powers—powers their ruthless grandmother would love to control. Catalina can earn her family some protection working as deputy to the Warden of Texas, overseeing breaches of magic law in the state, but that has risks as well. When House Baylor is under attack and monsters haunt her every step, Catalina is forced to rely on handsome, dangerous Alessandro Sagredo, the Prime who crushed her heart.

The nightmare that Alessandro has fought since childhood has come roaring back to life, but now Catalina is under threat. Not even his lifelong quest for revenge will stop him from keeping her safe, even if every battle could be his last. Because Catalina won’t rest until she stops the use of the illicit, power-granting serum that’s tearing their world apart.