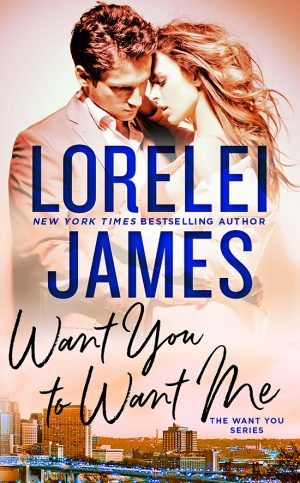 Want You to Want Me
Author: Lorelei James
Reviewer: Jen
Rating: B+

Gabi (Gabriella Welk) is a former Olympic hockey player who works at Jax’s rink (see previous book, I Want You Back). She has a frenemy relationship with Jax’s brother, Nolan, but they really don’t know one another. When Nolan goes to pick up some paperwork from Jax’s office, he overhears Gabi getting dumped by her boyfriend and offers to be her designated driver for the night. Unfortunately, he sticks his foot in his mouth, and Gabi ends up sneaking out of the bar. Luckily a heart-felt apology leads to a texting and then in-person friendship.

Nolan Lund is the odd man out among his cousins at Lund Industries; the only non “C” – he is the CEO in training, but his dad isn’t going to be stepping down any time soon. He works twice as hard to make up for his one mistake, yet he’s cut out of all major decision-making processes. Trying to turn over a new leaf and his playboy image, he’s pleasantly surprised over his budding friendship with (and growing attraction to) Gabi.

Gabi and Nolan connect because of honest and direct conversation. Instead of playing games or denying/avoiding difficult topics, they open up to one another from the start. The only thing I don’t like about this is that Gabi blames her “loose lips” on too much alcohol an awful lot, and I feel it is unflattering of her character. But that aspect goes away quickly as the pair becomes genuine friends, and Gabi relies on Nolan for help in a stressful situation. Because of the dual POVs, we discover that Nolan falls hard for Gabi from the start. I love that not only is he physically attracted to her, but likes so much about her person. It’s all the little things they do for one another that melts my heart. They fall in love quickly, and they are excited over admitting it. And because of the open communication, they are very much on the same page and recognize it’s not too soon even though it’s a short time.

While Gabi and Nolan’s journey to love seems like smooth sailing, they both have personal issues to deal with, causing conflict for the pair. Both are struggling with career-related decisions that ultimately impact each other. Rather than let the pair suffer alone, driving them completely apart, the author allows the pair to hurt and then heal through conversation and character growth.

Want You to Want Me is another delightful romance in Ms. James’s Want You/Need You series. I love how Gabi and Nolan embrace their feelings right from the start. Overall, the story is a fun, breezy read, making it great for the beach or poolside on a hot summer day.

Hockey player Gabriella “Gabi” Welk spent her life in pursuit of championships, but she has little to show for it besides dusty trophies and second-place medals. Now her career consists of several part-time jobs to make ends meet. When Gabi gets a chance at her dream job, she swallows her pride and asks her nemesis–smart, sexy and savvy Nolan Lund–for help.

Since being named future CEO of Lund Industries, Nolan has tried hard to overcome his reputation as a fun-loving playboy and ladies’ man. For the first time ever, he’s more focused on the company than his personal life. He spends his free time at the ice rink his brother owns, cheering on his niece at her hockey games…and watching Gabriella Welk, the superstar athlete and assistant coach who gets under his skin in a way he can’t ignore. He’s shocked when Gabi agrees to trade a favor for a favor.

They have little in common besides their mutual mistrust, but between family crises and sibling rivalries, Nolan and Gabi realize they want to be more than just friends–much more.