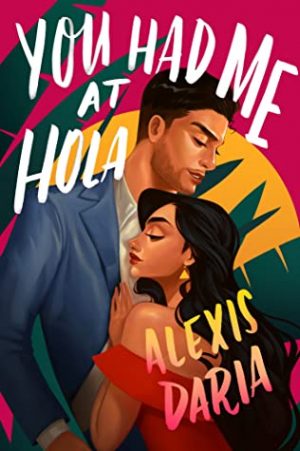 You Had Me at Hola
Author: Alexis Daria
Reviewer: Jen
Rating: A-

You Had Me at Hola is one of my favorite reads of the summer. Filled with strong Latinx characters, laugh-out-loud humor, and a touching romance, this book should be on your must read list.

Jasmine is fairly well-known from her work in soap operas, but it’s her relationship and very messy breakup with a rock star that’s keeping her in the headlines. Hoping to move on and up, she’s set to star in a new bilingual rom-com on a major streaming platform. Having lived her adult life in California, she’s back home in New York working on the show. Her romantic lead is Ashton Suarez, her grandmother’s favorite telenovela star.

Ashton is feeling a bit dejected after he was killed off of his last show. At almost forty, Ashton dreams of becoming a Hollywood star and sees this new show as a springboard to fame. However, he has secrets that must stay buried and doesn’t like the media attention Jasmine brings to the show.

Jasmine and Ashton are rom-com gold. From their “meet cute” failure when he accidentally spills coffee on her to their candid conversations and private rehearsals, it is evident to the characters and readers alike that Jasmine and Ashton have something special. What’s great about the way the story is written is how the author shares scenes from the TV characters’ POVS as the actors are filming; we see Carman and Victor, rather than Jasmine and Ashton. It gives readers insight on how the pair grow close (gaining feelings) because of being submersed into their roles.

Even though You Had Me at Hola is light and fun, there are darker moments and real hurt as the couple evolve and secrets come out (because you know they always do!). This is what makes a good story great: we see all sides of the characters; they are three dimensional. I cried some ugly tears at one point.

Another wonderful thing about the story is Jasmine’s relationship with her family, especially her cousins. I love how Jasmine realizes she has a problem crushing on handsome men, and instead of hiding the fact she’s crushing on Ashton, she looks to her cousins for help. And when her cousin texts “turn off your phone” she just does. She knows her cousins have her back and trusts them completely.

You Had Me at Hola is smart, funny, and an entertaining romance with a strong female lead and a diverse cast of characters. I strongly urge you to pick this one up!

Leading Ladies do not end up on tabloid covers.

After a messy public breakup, soap opera darling Jasmine Lin Rodriguez finds her face splashed across the tabloids. When she returns to her hometown of New York City to film the starring role in a bilingual romantic comedy for the number one streaming service in the country, Jasmine figures her new “Leading Lady Plan” should be easy enough to follow—until a casting shake-up pairs her with telenovela hunk Ashton Suárez.

Leading Ladies don’t need a man to be happy.

After his last telenovela character was killed off, Ashton is worried his career is dead as well. Joining this new cast as a last-minute addition will give him the chance to show off his acting chops to American audiences and ping the radar of Hollywood casting agents. To make it work, he’ll need to generate smoking-hot on-screen chemistry with Jasmine. Easier said than done, especially when a disastrous first impression smothers the embers of whatever sexual heat they might have had.

Leading Ladies do not rebound with their new costars.

With their careers on the line, Jasmine and Ashton agree to rehearse in private. But rehearsal leads to kissing, and kissing leads to a behind-the-scenes romance worthy of a soap opera. While their on-screen performance improves, the media spotlight on Jasmine soon threatens to destroy her new image and expose Ashton’s most closely guarded secret.