Audiobook review: A Touch of Stone and Snow by Milla Vane 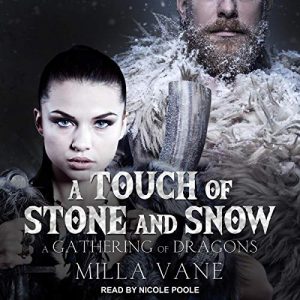 A Touch of Stone and Snow is the second sweeping tale in Ms. Vane’s Gathering of Dragons fantasy romance series. While a standalone romance, separate from the first book in the series, the overarching plot of the Destroyer coming back to the Western Realms continues. Taking place two years after the first book, A Touch of Stone and Snow is set in lands north of the Burning Plains (book 1), in Krimathe and Koth, where a few familiar faces (and a bunch of new ones) are in search of creating alliances to stop the Destroyer.

Lizzan is a disgraced Kothan soldier who was exiled from the island when it was believed she abandoned her troops while they were slaughtered by bandits. She’s wandered the lands making money as a guide and mercenary while remaining drunk to dull the loneliness and forget the horrors she’s seen. Aerax is the bastard prince of Koth who broke Lizzan’s heart when he didn’t stand up for her after the slaughter, and instead, sent her on her way from Koth. However, he hasn’t stopped loving Lizzan and carries a heavy burden he cannot share with another, lest they be killed.

Simply put, I absolutely adored A Touch of Stone and Snow. There is so much to gush about, so much I loved, but overall, it’s the amazing storytelling of Ms. Vane that makes the book so entirely epic. She can weave a tale like none other. She shares stories and gives history lessons – building the world, adding layer upon layer – through her characters. She creates tension in both quiet moments and action-filled scenes. I love the mythology and how the gods and goddesses of the realm shaped the world and its people, and how they still work within the world.

A Touch of Stone and Snow is epic and grandiose, yet it feels intimate. Lizzan and Aerax have a love that is above all else, even though they continually put the needs of their people and others before their own happiness. I love that they fight so hard not to give into their love, knowing it will hurt tremendously when they have to say goodbye again, yet they realize they can never be strangers. Their journey to HEA, which is so intimately tied to their quest to save Koth, is filled with challenges, and they each mature, realizing they are better together, rather than fighting or apart. They give one another all that they have. And they show us through their actions how heroes are made and not born.

I would be remiss if I didn’t at least mention the large list of supporting characters, each who add so much to the story. Some are still waiting for their stories to be shared like Laina, the High Daughter and future queen of Krimathe or Seri, the young Parsathean warrior. There are others whose story and character development is woven into Lizzan and Aerax’s story, like Degg, the Kothan counselor who started the journey opposed to all that Aerax and Lizzan represent. And of course, there is Caeb, Aerax’s snow leopard, best friend to Aerax and more human than most Kothans.

Narration: The story is shared in the alternating third person POVs of Aerax and Lizzan. Ms. Poole uses the same neutral female narrator during both POVs, altering the dialogue accordingly for each character. The array of dialogue voices are fabulous, each unique. Her males are deep. She portrays a teenage girl with authenticity. She emulates gods and goddess convincingly. And while the narrator tends to be emotionless and somewhat robotic sounding, the characters are not. Ms. Poole infuses pain and sorrow, joy and longing into her performance. Her style may be a bit abrupt and startling at first, but it suits the storytelling, especially because her characters are so richly portrayed.

In the end, I absolutely adored everything about A Touch of Stone and Snow, from the raw passion and quiet prayers, to the loss and hurt; joy and forgiveness. Lizzan and Aerax go through so much and deserve their happy ending.

My Ratings
Story: A+
Narration: A-

In addition, A Touch of Stone and Snow is one of…

Though they were childhood friends, Aerax cannot allow himself to be close to the only woman who might thwart his treacherous plan to save their island realm. But when a goddess’s demand binds them together, Lizzan and Aerax must find a way to overcome their painful pasts. Or there will be no future for the western realms . . .