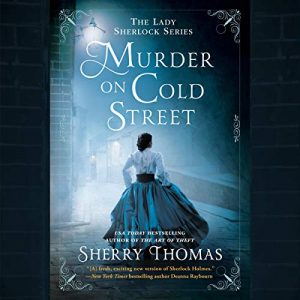 Following the jaw-dropping end of the previous book, Murder on Cold Street picks up at the precise moment The Art of Theft concluded, with Lord Ingram (Ash) about to tell Charlotte that he wants to be more than friends when Mrs. Treadles comes unannounced to ask for Sherlock’s help because Inspector Treadles is accused of murder. In order to save their friend, Charlotte, Ash, and Mrs. Watson and her visiting niece, begin their detailed investigation.

As per usual for a Lady Sherlock tale, the mystery is engrossing with its complex layers and misdirections. What is slightly different this time around is that Charlotte now has her own “Scooby gang,” and each embraces their part in assisting her. I love how easily Mrs. Watson and Ash understand their rolls, knowing their strengths and anticipating what Charlotte will need to solve the case. The group fosters and supports each person’s talents, together brainstorming and allowing Charlotte to hypothesize in her own time. They are a well-functioning group, with each character adding value to the story.

Although I don’t keep a count, it seems that there are several more sections of the book told from Ash’s POV than in prior stories. I enjoy how Ash’s outlook is evolving because of his brush with the law (see the third book, The Hollow of Fear) and the freedom his upcoming divorce will bring. Watching him pursue his desires and express his feelings is exciting. Charlotte is equally impacted by the changes in Ash’s behavior. This allows her to reevaluate her own stance on their relationship and how they are with one another. This all leads to Ash and Charlotte’s relationship taking up a much larger part of the book than in any previous title. They often discuss it when the pair is alone, yet it never overshadows the mystery. Charlotte needs to understand and define it as it grows.

Narration: The story is shared from multiple third-person POVs, both male and female; primarily Charlotte and Ash. This is the fifth book in the series, and the character voices and overall narrator are very familiar to me. I rather enjoy Ms. Reading’s performance. Her narrator has a feminine, accented voice. The dialogue is altered based on who is speaking – enough to identify each character out of a group. Ms. Reading’s male voices are fairly deep and genuine. She does a wonderful job infusing the dialogue with just a hint of emotion, or in Charlotte’s case, her attempts to express the appropriate emotion, making the entire story come to life.

In the end, I thoroughly enjoyed listening to Murder on Cold Street. The Lady Sherlock mysteries continue to impress and captivate me. But it’s Charlotte’s growing circle of trust and network of friends, along with the developing romance with Ash, that keeps me coming back for more.

Inspector Treadles, Charlotte Holmes’s friend and collaborator, has been found locked in a room with two dead men, both of whom worked with his wife at the great manufacturing enterprise she has recently inherited.

Rumors fly. Had Inspector Treadles killed the men because they had opposed his wife’s initiatives at every turn? Had he killed in a fit of jealous rage, because he suspected Mrs. Treadles of harboring deeper feelings for one of the men? To make matters worse, he refuses to speak on his own behalf, despite the overwhelming evidence against him.

Charlotte finds herself in a case strewn with lies and secrets. But which lies are to cover up small sins, and which secrets would flay open a past better left forgotten? Not to mention, how can she concentrate on these murders, when Lord Ingram, her oldest friend and sometime lover, at last dangles before her the one thing she has always wanted?