Audiobook review: Who Wants to Marry a Duke by Sabrina Jeffries 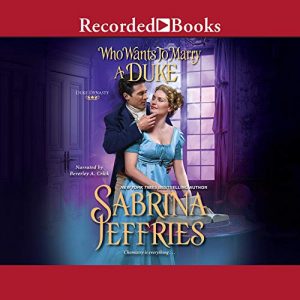 Who Wants to Marry a Duke is the third full-length tale in the entertaining Duke Dynasty series. This time around, the story focuses on middle duke, Marlowe Drake, aka Thorn. He is twin to Gwyn (heroine of the previous book) and son of his mother’s only “love” marriage. When he first arrived in London after leaving his stepfather and mother ten years ago, Thorn was caught kissing Miss Olivia Norley and was blackmailed into offering for her by her mama. Not wanting to be trapped in a marriage so she could pursue her chemistry career, Olivia turned down Thorn, and the whole experience blackened his view towards love and marriage. Ten years later, Olivia is hired by Thorn’s eldest brother, Grey, to determine if his father had been murdered. Assuming she’s up to her scheming ways, Thorn insists on overseeing her work, leading to a new understanding between the pair.

Olivia and Thorn share what I would consider a typical historical romance love story. They begin their journey clouded by misconceptions and on frosty terms. Yet, the more time they spend together, the more they realize the genuinely like one another. He pursues her for physical pleasure and she is more than happy to partake. The truth of events comes out, but some secrets remain in place, which causes conflict down the road.

Olivia is a woman of science and very innocent. Now considered a spinster (and happy for it), she  has only kissed one man—Thorn. And ten years later, he is the only man who ignites desire within her. She is all too happy to engage in non-proper activities with Thorn, not caring about the consequences since she doesn’t want to marry. She is focused on her science and she is extremely knowledgable in this realm. Which is why I found it odd that she didn’t understand the physical responses of lust and desire. I understand she’s innocent, but she is a scientist – how can she not know these things? I guess it was the way of the times.

Thorn is Olivia’s opposite. He is a rake and loves to bed women who aren’t looking to marry. He is also a secretive playwright. While Olivia proudly pursues her unorthodox profession, he hides his true nature from society and family. He is also very cynical when it comes to love – even believing his own sister’s and brother’s marriages are solely lust. He was hurt by both Olivia’s rejection and her mama’s blackmail, leaving him doubt that love can exist. And he holds on to this up until it is nearly too late for his HEA.

The murder mystery which began in the first book, makes significant progress in Who Wants to Marry a Duke. The siblings begin to piece together evidence that ties together the possible murders of four dukes, as well as compile a list of suspects and motives. I have to say, I find this aspect of the stories thrilling and enjoyed how it took up a larger roll in this book.

Narration: The story alternates between Olivia and Thorn’s third person POVs. Ms. Crick uses the same delightful British female narrator for both POVs. The dialogue is adjusted slightly based on age and station, with a more deliberate contrast between her male and female characters. Her female voices all light and slightly different. Her males are deeper and convincingly masculine. To this untrained ear, the accents appear to be appropriate for the setting and period.  She adds appropriate emotion as called for, and overall adds value to the listening experience.

In the end, Who Wants to Marry a Duke is a fine addition to the Duke Dynasty series. I ended up loving the continuing mystery of what happened to the deceased dukes a bit more than the romance in the story, but overall, it’s an enjoyable tale.

A past kiss with adorably bookish Miss Olivia Norley should be barely a memory for Marlowe Drake, the duke of Thornstock. After all, there are countless debutantes for a handsome rakehell to charm beyond a young lady whose singular passion is chemistry – of the laboratory type. But Thorn has not forgotten – or forgiven – the shocking blackmail scheme sparked by that single kiss, or the damage caused to both their names. Now, Thorn’s half brother, Grey, has hired the brilliant Miss Norley for her scientific expertise in solving a troubling family mystery. And the once-burned Thorn, suspicious of her true motives, vows to follow her every move….

For Olivia, determining whether arsenic poisoning killed Grey’s father is the pioneering experiment that could make her career – and Thorn’s constant presence is merely a distraction. But someone has explosive plans to derail her search. Soon the most unexpected discovery is the caring nature of the reputed scoundrel beside her – and the electricity it ignites between them….