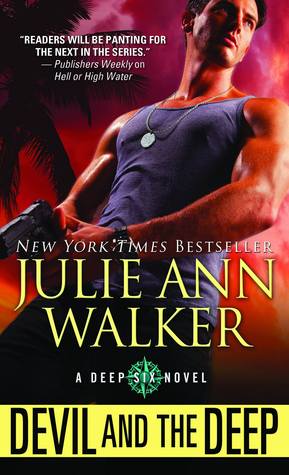 While I had lukewarm feelings about the romance in Hell or High Water, I was totally on board for the romance and couple in Devil and the Deep. I think I’ve put the finger on my issue with the first couple in a series. They don’t have the time to build up to their HEA, it can come off too instan-a-love for my taste. But with Maddy and Bran meeting in the first book and then having a long-distance friend over the three months since the events in Hell or High Water I feel like their romance doesn’t have that instan-a-love feel to it.

Devil and the Deep picks up about three months after Hell or High Water and the group of ex-Navy SEALS is still looking for the legendary lost ship, La Santa Christina, and the treasures it holds. Bran is part of the team and he the biggest player when it comes to women. He’s never been in love and doesn’t want to be. He had a rough childhood watching his father beat his mother because he loved her some much that he got jealous every time she even spoke to another man. Bran swore he would never turn into his father and that if love did that to a person he wanted no part of it.

Maddy is a plucky Southern gal who lived a different life than Bran. She had a loving home life and a rich father. But she’s not a snobby rich girl, she down to earth and has a huge heart. One that she hopes she can trust to Bran’s hands.

My only complaint with Devil and the Deep is the same one I have with other books that feature a lead Southern character who has over the top stereotype speech. As a Southerner, it drives me nuts. Most of the “my momma/daddy/grandma etc. say” that Maddy used, I’ve never heard of and a few had me rolling my eyes.

“If he believed that, he was crazier than a catfish carrying a canteen, as her grandma used to say.”

Bran and Maddy is a classic case of opposites attract and their romance was fun to watch develop. It was sweet, funny, and sexy as hell.

“I will always fly to your side with all the courage and destruction in my heart.”

You could read Devil and the Deep as a stand-alone but if you’re like me and what to see the couple’s relationship build, then I highly recommend you read the first book, Hell or High Water to see how Bran and Maddy first met. And speaking of watching a couple met, you have to read Devil and the Deep before you read the third book, Ride the Tide, since will surely be about Mason and Alexis. They shared page time with Maddy and Bran and their HEA will be great to read.

Cocktail parties, political fundraisers, and charity events are Maddy Powers’ way of life. But the daring man who appropriated her father’s yacht a couple of months ago is still out there, somewhere, and she wants to pay him back for the scorching kiss they shared.

Behind his suave smile and ladykiller eyes, Bran Palladino carries a dark secret that keeps him from pursuing Maddy… even though he can’t get her out of his head. But when Maddy is kidnapped as part of a grand scheme, it’s time to put up or shut up… because Bran can’t live without Maddy now.