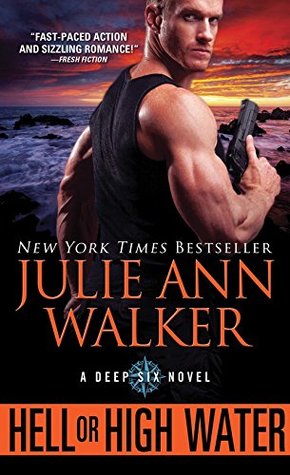 I got an intro into the Deep Six series by way of the short prequel, Hot as Hell. It was a bit of sexy, a bit of suspense leaving me looking forward to reading Hell or High Water the first full-length novel in the series.

Hell or High Water is a solid start to Julie Ann Walker’s Deep Six series about a group of ex-military buddies seeking their fortune looking for sunken treasures. After they promised one of their own they would get out of the Navy and live a real-life, the guys have been making the most of their new status as civilians. They may have left the dangerous life of a soldier behind but they find a new danger out on the open seas. Not to mention the sexy and dangerous women they meet along the way.

Olivia Mortier, a CIA agent, and Leo Anderson, an ex-Navy SEAL worked a mission together in Syria and they’ve not been able to forget about each other. Leo is living in Key West with his buddies when Olivia shows up to convince him and his band of brothers to come out of “retirement” to help her recover the chemical weapons at the bottom of the sea. Leo jumps a the chance to be around Olivia again. Danger ensues, romance happens and witty banter keeps the plot moving along with a healthy dose of action.

Hell or High Water hit all the right buttons I look for in a romantic suspense novel: danger, sexy and great humor. I’m jumping in with both feet into the next novel, Devil and the Deep.

In a world on the brink…

Six men. One sunken Spanish galleon. Millions in gold and silver coins lying on the ocean floor. And a past that refuses to let the guys of Deep Six Salvage forget the Navy SEAL motto: the only easy day was yesterday…

There’s more than one kind of treasure…

The nation’s security has always been CIA agent Olivia Mortier’s top priority. But a mission-gone-wrong has begun to make her wonder if there’s more to life than risking hers.

And more than one secret at the bottom of the sea…

Only two things could make Leo Anderson abandon his hunt for the legendary lost ship, La Santa Christina, and return to the world of weapons and warfare he swore to leave behind: a capsule of enriched uranium, lost on the ocean floor, and a plea for assistance from the one woman he can’t seem to forget…