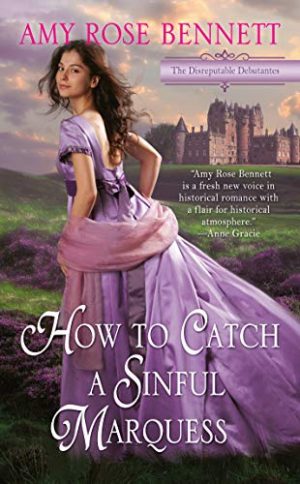 How to Catch a Sinful Marquess is a regency retelling of Beauty and the Beast, and it has all the proper elements for a regency retelling: a maiden needing to escape a horrible arranged marriage and a “beast” that has shut himself away and refuses to allow himself to be loved. Those elements work. Olivia is a sweet, wealthy orphaned maiden whose aunt and uncle are supporting their three children with her wealth, planning for Olivia to marry their abusive son in order to keep the money in the family and in return treating her cruely.

Hamish is her kind but notorious rake of a neighbor whose scars are both visible and invisible. When Olivia proposes a solution to a rather large and unexpected problem, he takes her up on her offer and heads off on what should have a been a physically difficult but uneventful trip, and naturally it is anything but. Rescue after rescue takes place as they help one another heal from a lifetime of hurt.

Overall the novel is fine, the action is fairly quick-moving, and I appreciated that the characters weren’t the perfect beauties so often used in these novels; they have very noticeable “flaws” which made them relatable and allowed for an arc in the novel that is different from others I’ve read of late. I will admit I have not read the first novel in this series so I was in no way invested in these characters and can’t say the novel made me overly invested in them. Despite some strong points, like well written chemistry and poignant moments mostly this novel felt like a bridge to the next novel in the series which was disheartening because Oliva and Hamish had the potential to tell a really great story.

A reserved debutante and a former soldier make an unlikely but fated match as they hasten for the Isle of Skye.

Orphaned heiress Olivia de Vere should have the world–or at least the men of the ton–at her feet. But when she’s thrown out of a young ladies’ academy, Olivia doubts she’ll ever find someone who will love her, rather than her bank account. To make matters worse, her dissolute cousin Felix is determined to marry her against her wishes. A virtual prisoner in her guardians’ London townhouse, Olivia can’t help but develop a tendre for her neighbor, a handsome Scottish marquess.

Battle-scarred in more ways than one, Hamish MacQueen, Lord Sleat, has braved many dangers in life. But nothing has quite prepared him for the shock of having a young child dumped on his doorstep, with a note claiming she’s his daughter. Just in the nick of time his pretty neighbor appears, offering to act as a nursemaid for the young girl on their journey to his estate in Scotland. He suspects she has her own reasons for wanting to flee the country…

The close traveling quarters leads to a fierce attraction between Olivia and Hamish that seems impossible to resist. But when ghosts from the past and monsters from the present threaten to tear them apart, will their unlikely love survive?