All Mouth and No Trousers 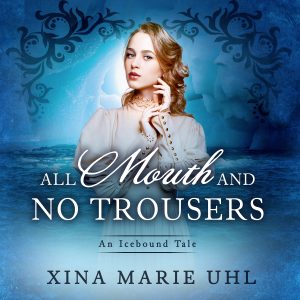 Of all the foes Commandant Gorge Elderbatch had fought in his thirty-odd years as a British naval officer—enemy combatants, pirates, insubordinates, pestilence, penury, and probably some other terrors he couldn’t recall on the fly—one stood out above all others. One who was the most difficult, the most intractable, and the most infuriating—his secretary, Miss Electa Yellowsmith.

Oh, she looked harmless. Young enough to be his daughter, twenty or twenty-five at the most, all of 105 pounds soaking wet, slender and willowy, doll-like with her perfect blonde hair and clear, wide blue eyes, her long and delicate fingers tapping away on the Smith Premier typewriter, and completely unfazed by his rather imposing (if he did say so himself) presence.

“You will most certainly retype that order, Miss Yellowsmith,” he instructed, jabbing his finger like a bayonet at the trash bin. She had taken one look at the order for two boxes of premium cigars and six tins of grade-A snuff and ripped it down the center before depositing it in the waste bin.

Electa continued typing for several excruciating moments, posture erect, crisp lace collar shockingly white and open slightly to reveal the unblemished skin of her pale neck. Her eyes flicked to his scribbled notes at her right, and her smooth, painted red fingernails created an efficient, discordant staccato on the keys.

“Miss Yellowsmith, do me the honor of looking me in the eye when you commit mutiny!”

That got her attention. She froze, then took a measured breath before doing as he demanded.

“This can hardly be considered mutiny, Commandant Elderbatch.” Eyebrows raised, she looked up at him, lashes dark and thick, her gaze unwavering and unflinching.

“It is, instead, an act of mercy. A moral objection, not to mention a most rational personal decision to keep my superior officer in the best possible health that he might continue to serve the Crown now and in years to come. Need I remind you of the spectacle you made of yourself the last time you enjoyed Mr. Smithson’s Most Excellent Tobacco Blend Cigars while at the same time consuming Bowmore Whiskey?”

“Nonsense,” he spluttered. “I remember nothing of the sort.” He ignored the little niggle of doubt that wormed around the edges of his memory. He had been delighting himself with Saturday evening scotch and cigars since his early thirties, whenever circumstances permitted, and now that he was commandant and in charge of the supply roster—a supply roster that would sail out to Chile two days hence to be fulfilled at some future date—he was damn well going to fill it with some indulgences every now and again.

“Well, let me help you recall, sir. I was party to the whole sordid affair. Let me assure you, there was hacking and choking and phlegm. Vomiting accompanied this. Volumes of vomit, mixed with snot and tears and seasoned by general blubbering. All of this is burned upon my memory like a smoking black brand upon the behind of a sheep.”

Gorge felt the blood rise in his cheeks. “Great Scott, woman! Have you no decency? Bringing up such details!”

She seemed untroubled. “You insisted.”

“A man must have his celebrations. Why, it is a well-known maxim, old even in the days of the ancients. Democritus himself says, ‘Life without celebrations is a long road without an inn.'”

“Good for Democritus. However, what you call celebrating I call debauchery and worse, self-injury. I won’t have it. It does not agree with you, and if you won’t accept that, I will see that you are kept free of such vices. Make do with regular snuff and hooch like everyone else.”

“But the regular snuff and hooch are foul pretenders! Which is the precise reason I am ordering the special blend!”

Oh, sure, he did sometimes cough a little—the cigars were damnably strong stuff—and perhaps mixing them with numerous cups of Scotch after being clear of it (due to running out, not any deliberate abstention on his part) for several months was, maybe, a little too much for his constitution. Damn the pneumatic fever he’d suffered through in ’99. He hadn’t been the same since.

Electa turned back to her work. “You’ll thank me for it later, when you’re not hooked up to an iron lung in the medical ward, wheezing, choking, and begging for one easy breath.”

“I already have a wife back in England!” he trumpeted. “I certainly don’t need one here, too!”

Gorge stomped back to his desk and flung himself into the chair, which squeaked and lurched backward, threatening to dump him onto the hard floor. He jammed his elbows onto the polished wooden top and grabbed his head with his hands, breath harsh and heart slamming against his chest. This was bloody intolerable! Blasted outrageous! Women! Such infernal creatures! He could not escape their vexatious influence even down here at the bottom of the world.

Pick your battles, Gorge, he reminded himself in a harsh, rumbling whisper, repeated numerous times until the angry tic in his eye ceased and the throbbing in his forehead abated.

The problem was that everything seemed to be a fight with Miss Yellowsmith. As if he didn’t have enough to occupy himself with here at the most inhospitable command on the face of the planet, Hope Bay Station, in the British Protectorate, Antarctica.

Hope Bay was unlike any place on earth, with the never-ending ice and the roaring gales and the cold so blistering and unforgiving that you could lose your life in a matter of minutes. One had to struggle just to stay alive in such a place. He certainly didn’t need the daily upset of a defiant secretary. But alas, that was his lot in life, it appeared.

Damned inconvenient, it was.

“Harrumph,” he said, then sat there thinking around the emotion. Perhaps he could work around it after all . . .

“And don’t think you can go directly to the quartermaster with this request!” Electa called from the other room as though she heard his thoughts. “I’ve already had a word with him, and I’ve enlisted the base doctor on my side as well. You’ll have none of your vices while I’m around.”

The tic? The one he was just now getting a handle on? It was back, full-force.

A romantic novella in the Icebound series, an ongoing collection of polar delights.

Behold dogsleds and penguins. Howling winds and cold, pitiless wastes. This is Antarctica, where the intrepid inhabitants of the frozen ends of the earth battle the terrain, and each other, to find love—in a past much like that of the early 1900s.

Amidst the scientists and explorers at the British Antarctic base in 1900 there are a few women who serve as maids, cooks, and nurses.

The beautiful blonde secretary has no problem attracting male attention, but she’s got her eye set on Commander Gorge Elderbatch. He may yell like a longshoreman and drink like a fish, but Electa likes the cut of his jib, and the idea of being an officer’s wife.

Gorge has enough trouble with ice crevasses, blizzard forecasts, and upcoming polar expeditions without his smart-mouthed secretary defying him at every turn. What could a looker like her want with a grump like him, anyhow? Especially since he’s sworn off women after his disastrous divorce.

Gorge may be as dense as an iceberg, but Electa hasn’t yet met a man she couldn’t charm. Though if that doesn’t work she has plenty of schemes that just might. The result is a comedy of errors and explosions in a frostbitten frontier.

Raised in the wilds of Arizona, Xina Marie Uhl obtained a BA and MA in history, with a specialty in the ancient Mediterranean. After teaching college level history classes, she wrote more than thirty nonfiction books for young people and worked on numerous educational projects in time periods from prehistory to the 21st century.

Uhl‘s fiction spans genres, including romance, humor, fantasy, and adventure—and locations, including the Roman Empire, Antarctica, and the Old West. Her latest audiobook releases are two stories from the Icebound series, Whiter Pastures and All Mouth and No Trousers, from XCPublishing.net. Follow her reader’s list for bonus stories, info about new releases, and special deals at http://bit.ly/30qhIAS.