On the Wings of War 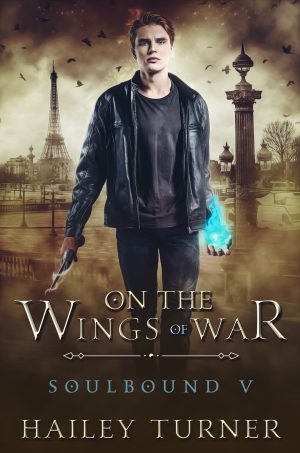 “We need Lucien to carry the invitation to the auction and buy the Morrígan’s staff,” Patrick said.

“Because I don’t have the background necessary to pull something like that off. There’s a strong possibility Ethan may have warned whoever is running the auction about me, and to be on the lookout for government agents in general.”

Jono sighed. “All right. Where is the auction taking place?”

Patrick glanced over at Jono. “London.”

The way Jono’s grip tightened on the steering wheel said as much as the silence that settled between them. It lasted until they were halfway to the Queens Midtown Tunnel, but Patrick didn’t try to get Jono to talk until he was ready.

“Yeah. Our intelligence indicates the auction is being held there. Whoever is Medb’s intermediary, they’re selling it in the black market equivalent of Sotheby’s or some sh*t.”

Jono looked at Patrick over the rims of his sunglasses. “You’re the last person he’d ever obey.”

Patrick snorted. “We’re gonna have to make it worth his while.”

Jono pulled his hand free to smack Patrick lightly on the chest. “You aren’t funny.”

“You love my sense of humor.”

“I love you, even when you’re a right arsehole.”

Patrick didn’t fight the smile that came to his face. Jono’s love was something he didn’t ever want to take for granted, even if he couldn’t bring himself to voice the same words back. A year of being together and Patrick could arguably say he’d found the man he wanted to spend the rest of his life with—if he managed to survive.

“You know, we missed our anniversary dinner because I was in DC,” Patrick said.

Jono turned his attention back on the road. “I thought we agreed it was after summer solstice?”

“Okay, so we missed our pre-anniversary dinner. I still think the first night we met needs to be celebrated.”

They could do without fighting a soultaker, but Patrick wouldn’t be averse to some wall sex.

“We could be celebrating it soon if we didn’t have to go see Lucien.”

Patrick groaned. “Stop reminding me about how much my job sucks.”

Remembering the dead will always give them life.

The coveted Morrígan’s staff is up for sale on the black market to the highest bidder, and SOA Special Agent Patrick Collins will do whatever it takes to ensure the Dominion Sect doesn’t get their hands on it. Returning the weapon to its rightful owner is another step on the long road toward clearing Patrick’s soul debt, but he won’t walk it alone. Jonothon de Vere won’t let him.

Obeying the gods means Patrick must travel to London. For Jono, it means facing a past he thought he’d left behind forever. His return to England isn’t welcome, and neither is their pack, but Jono and Patrick will face the antagonism together. Politics aside, their priority must be the mission, but the bone-chilling secret they uncover in the London god pack will have far-reaching repercussions no one can ignore.

A race against time takes Patrick and Jono from the streets of London to the bright lights of Paris, where hospitality is thin on the ground, the air is filled with whispered prayers for the missing, and the Morrígan’s staff will end up in the one place it should never have gone—a graveyard.

For beneath Paris lie the long-forgotten dead, and when they rise to walk again, the living can only hope to die.

On the Wings of War is a 109k word m/m urban fantasy with a gay romantic subplot and a HFN ending. It is a direct sequel to A Vigil in the Mourning. Reading the first book in the series would be helpful in enjoying this one.

To celebrate the release of On the Wings of War by Hailey Turner, we are giving away three e-books to kindle email addresses from Hailey Turner’s back catalogue. Open internationally, must be 18 to enter and win.