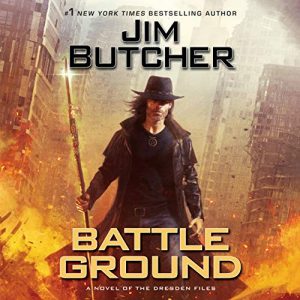 I wasn’t sure if I’d write this review. I listened to 50% of Battle Ground and then stopped. I sat with it for a couple weeks – thought maybe I’d try again when I was in a better frame-of-mind. But the more I stewed on what I listened to for over seven hours, I realized, I’m not happy, and I’m not going to go back to the book any time soon.

Let me set the stage… I waited YEARS to finally get a new Dresden Files book; Peace Talks came out earlier this summer. Overall, it was pretty good, but I wasn’t happy with a couple of items – the biggest being that there was no complete story within the book: it was only part one, with Battle Ground presumably being part two. Now, these are some hefty books, and I invested a lot of time listening to an incomplete story with Peace Talks – but Dresden is one of my favorites, so I was okay with it.

Battle Ground picks up at the moment Peace Talks concludes – it’s a continuation of the storyline developed in that book. From the first moment of the book, it was one exhausting fight after another. Harry fights all the bad guys, against all sorts of impossible odds. People get hurt badly. People Harry loves get hurt. Badly. At 40% in, I was battle weary, and I didn’t know if I could listen to hours upon hours of non-stop fighting.

And then… it happened. For those who have read the book, you know the exact moment I mean. It is horrible and gut-wrenching, and completely unnecessary. I’m never one to say that an author can or cannot do whatever he wishes with his characters and world. But I don’t have to like it, and if I deem it too extreme or too much or if it doesn’t sit well with me, then I have the right to stop. So I did. And it makes me sad because I was not ready to stop reading this amazing series.

Narration: James Marsters is Harry Dresden for me, and he continues to impress in Battle Ground. He captures all of Harry’s verbal mannerisms and inner turmoil. He nails Harry’s sarcasm, but also softens for Harry’s more emotional scenes. The book features a cast of dozens, most of whom we’ve heard over the course of multiple books, and Mr. Marsters manages to keep each voice unique and identifiable from the start. The vast array of voices, both human and other, are distinct and perfectly formed, ranging from a young human child to an ageless demon.

In the end, Battle Ground was too much battle and not enough story (through 50%). It was repetitive and dark, and went too far for me. Maybe someday I’ll try and return to this series that has brought me so much joy, but right now, I just can’t.

My Ratings
Story: DNF at 50% (read through Chapter 22)
Narration: A

Harry has faced terrible odds before. He has a long history of fighting enemies above his weight class. The Red Court of vampires. The fallen angels of the Order of the Blackened Denarius. The Outsiders.

But this time it’s different. A being more powerful and dangerous on an order of magnitude beyond what the world has seen in a millennium is coming. And she’s bringing an army. The Last Titan has declared war on the city of Chicago, and has come to subjugate humanity, obliterating any who stand in her way.

Harry’s mission is simple but impossible: Save the city by killing a Titan. And the attempt will change Harry’s life, Chicago, and the mortal world forever.