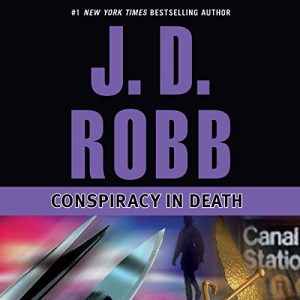 The gang is all present for another murder case.

Never fails when Eve is researching a case she finds a link to Roarke no matter all small, but this time it’s Eve who gets mixed up as a suspect in a murder.

Conspiracy in Death focuses on a string of murders of homeless people or people who would not be missed. What do they have in common? They are missing organs. Eve has to figure out who and why they are taking organs from people who are not necessarily healthy. So the idea the organs are being sold on the black market is not the motive.

Whoever the murderer is, they want Eve off the investigation, and they use a beat cop who has an obsessive grudge against her as collateral damage. With the cop’s murder and Eve as an aspect she is working on the sidelines to help solve the case.

With the precision of a surgeon, a serial killer preys on the most vulnerable souls of the world’s city streets. The first victim: a sidewalk sleeper, found dead in New York City. No bruises, no signs of struggle. Just a laser-perfect, fist-sized hole where his heart had once been. Lieutenant Eve Dallas is assigned to investigate. But in the heat of a cat-and-mouse game with the killer, Dallas’ job is suddenly on the line. Now her hands are tied…between a struggle for justice – and a fight for her career.