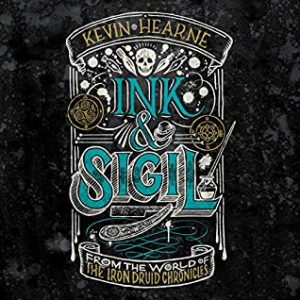 After becoming a big fan of the team of Kevin Hearne and Luke Daniels, through listening to the Iron Druid Chronicles, I was excited to get earbuds on Hearne’s new series Ink & Sigil which is also the title for the first book.

Ink & Sigil is set within the same world as the Iron Druid Chronicles making it easy to jump into the world-building. This time around our MC is Al MacBharrais, a sigil agent who has his hands full trying to figure out who murdered his apprentice and what said apprentice was up to that got him killed.

He works to find out who is in charge of the fae trafficking that is connected to the murder of his apprentice. In doing so he makes some new friends with a goblin and a faerie who were victims of the trafficking. Funny hijinks ensue with mild action scenes and a thought-provoking plotline that mirrors some of the evils happening in real life at the moment. (Hearne weaves his knowledge of English Literature and possibly his personal political thoughts into his stories and Ink & Sigil is no different. I rather enjoy the way he pokes fun at both English Literature classics and avid gun owners.)

Fans of Hearne’s Iron Druid Chronicles will see many parallels between Al and Atticus even though their power bases are different. Plus Al truly looks and feels all of his sixty years. There’s a scene where he tells how he briefly (and by accident) meets Atticus and how he is jealous of how Atticus still looks and feels like he is in his early twenties.

Luke Daniels’ adaptable narration from character to character is an earmark of a great narrator, and he brings it to Ink & Sigil. Daniels truly kept me entertained with all his delightful voices for some of the quirkier characters. As long as Daniels continues to narrate Hearne’s titles, I will continue to listen rather than reading.

My Ratings
Story: B
Narration: A+

Al MacBharrais is both blessed and cursed. He is blessed with an extraordinary white moustache, an appreciation for craft cocktails – and a most unique magical talent. He can cast spells with magically enchanted ink and he uses his gifts to protect our world from rogue minions of various pantheons, especially the Fae.

But he is also cursed. Anyone who hears his voice will begin to feel an inexplicable hatred for Al, so he can only communicate through the written word or speech apps. And his apprentices keep dying in peculiar freak accidents. As his personal life crumbles around him, he devotes his life to his work, all the while trying to crack the secret of his curse.

But when his latest apprentice, Gordie, turns up dead in his Glasgow flat, Al discovers evidence that Gordie was living a secret life of crime. Now Al is forced to play detective – while avoiding actual detectives who are wondering why death seems to always follow Al. Investigating his apprentice’s death will take him through Scotland’s magical underworld, and he’ll need the help of a mischievous hobgoblin if he’s to survive.