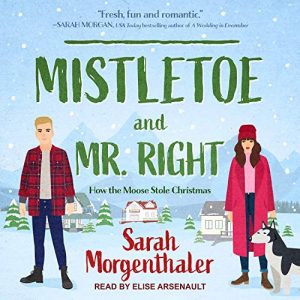 In Mistletoe and Mr. Right, Ms. Morgenthaler returns listeners to the quaint town of Moose Springs, Alaska, roughly 4-6 months after the conclusion of the previous book. Property developer Lana Montgomery is working on her high-end condo project and buying up commercial properties in town. Although the residents view her as an outsider, she has a few local friends and continues to try and win over the town – trying to get them to understand how much she loves Moose Springs and wants it to succeed.

Bar owner Rick Harding knows he’s late on his rent payments to the Montgomery Group, but can’t see himself opening his bar to tourists after one killed his nephew’s family. He’s prepared to do business with Lana, but is pleasantly surprised to find a friend in the process.

Upon my return to Moose Springs, Alaska, I found that I’ve fallen in love with the scenic town and several of its denizens. They want to protect their town from tourists, but many also understand that they wouldn’t make ends meet without them. While Lana is an outsider, she has been coming to Moose Spring for years, and sees the good in the town and its residents. She tries so hard to do right by them, even when they can’t see her bigger picture. The author does a good job of making fast-paced, deal-wheeling Lana a down to earth, likable character. She shows us that Lana wants to make the town better for all but won’t bulldoze the residents.

Rick is such a good guy; taking care of his nephew after his wife left them both. But he lacks confidence, and doesn’t feel he has anything to give a relationship. While their pairing may seem like an “opposites attract” situation, they are both similar on the inside; warm, kind, caring… and lonely. So when a mutual attraction leads to friendship, and eventually more, it doesn’t come across as unattainable or unrealistic.

Narration: The story is shared via the third person POVs of Rick and Lana. Ms. Arsenault uses a natural-voiced female for the narrator, changing up the voices slightly for dialogue. Generally, the dialogue was well suited for each character, with males deeper and more masculine; however, the author describes Rick’s voice is described as a “low, rich voice” and Lana as “husky,” and the narrator isn’t really any of those. With that said, I really enjoyed her performance and felt it added to the story. She plays up to Lana a no-nonsense attitude and gives the beta-males a lot of heart. A few of the supporting characters (for example Zoey’s grandmother and Lana’s mom) really stand out; Ms. Arsenault nailed the attitude, regional dialect, and/or socioeconomic standing.

In the end, Mistletoe and Mr. Right – Lana and Rick – won me over and I look forward to returning to Moose Springs in January 2021 with Enjoy the View.

My Ratings
Story: B/B+
Narration: B+

Lana Montgomery is everything the quirky small town of Moose Springs, Alaska can’t stand: a rich socialite with dreams of changing things for the better. But Lana’s determined to prove that she belongs…even if it means trading her stilettos for snow boots and tracking one of the town’s hairiest Christmas mysteries: the Santa Moose, an antlered Grinch hell-bent on destroying every bit of holiday cheer (and tinsel) it can sink its teeth into.

And really…how hard could it be?

The last few years have been tough on Rick Harding, and it’s not getting any easier now that his dream girl’s back in town. When Lana accidentally tranquilizes him instead of the Santa Moose, it’s clear she needs help, fast…and this could be his chance to finally catch her eye. It’s an all-out Christmas war, but if they can nab that darn moose before it destroys the town, Rick and Lana might finally find a place where they both belong…together.