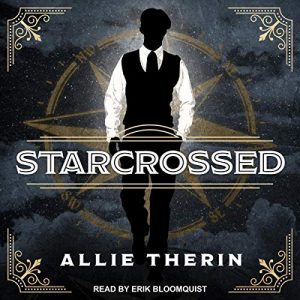 Starcrossed opens where the previous book, Spellbound, left off. Rory and Arthur are at Arthur’s brother (Harry)’s home. Mrs. Brodigan and Rory are there to authenticate some of Harry’s collection, while they keep their paranormal friends safe on Harry’s land. Meanwhile back in Manhattan, Zhang and Jade are investigating Mansfield’s death. Although this is a “Carina Press Romance Promise” book guaranteeing an HEA/HFN, the series reads like a historical urban fantasy with a significant story arc that runs across the series. It is critical to read Spellbound before opening Starcrossed. I had to go back and check my notes to help bring me up to speed so that I could throughly enjoy Starcrossed.

And enjoy the story, I did. I love the mix of the Prohibition-Era Manhattan setting and the unique paranormal and magic-based mythology. Starcrossed brings forward significant plot development and additional world-building. We learn more about the dangerous relics and the different players on the field. While at times I got a bit overwhelmed by the amount of new information, overall, I enjoyed the direction the book takes the series.

Starcrossed also shares the continuing and developing romance of paranormal immigrant Rory, and uptown, influential Arthur. The pair continue to fight the odds – first and foremost that they are a gay couple in a time when it is most certainly not accepted. Second, they are from completely different social standings, which means that they really don’t have any opportunities to be seen together. There is only so many times Arthur can pull off that Rory is a cousin or nephew. Additionally, Arthur wants to provide for Rory, but Rory will not accept any “charity,” as he has always had to make his own way and learned early on never to depend on another. Their wildly different backgrounds and current standing do lead to secrets and misunderstandings, but overall, the pair grows closer.

One of the highlights of the series is the presence of supporting characters Jade and Zhang. They bring stability to Rory and Arthur. They are able to see what Arthur for some reason cannot. While it is frustrating that Arthur seems so blinded to the possibilities and probable truth, Zhang and Jade make connections and help the plot progress.

Narration: The story is performed by Erik Bloomquist, alternating between the third person POVs of Arthur and Rory. The narrator is a neutral male, with dialogue voices adjusted for gender, age, and social standing. Arthur’s voice cultured and smooth, fitting of the well-educated and well-traveled man. Rory is younger, more tentative but also prone to emotional outbursts. While the characters are each unique, I did notice that there were times I had difficulty knowing who was speaking during dialogue (mostly due to the lack of dialogue tags). Additionally, I struggled understanding when a character was thinking to himself versus speaking out loud.

Overall, I found Starcrossed a delightful and entertaining follow up to Spellbound. The unique mythology holds my interest, and the romance between Rory and Arthur is swoon-worthy.

When everything they’ve built is threatened, only their bond remains…

For Arthur, there’s only Rory. But keeping the man he’s fallen for safe is another matter altogether. When a group of ruthless paranormals throw the city into chaos, the two men’s strained relationship leaves Rory vulnerable to a monster from Arthur’s past.

Reviews in the Series:
Spellbound by Allie Therin (Magic in Manhattan #1) – Audiobook Review