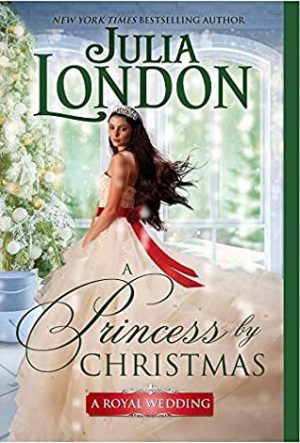 A Princess by Christmas picks up a year or so after the conclusion of the previous book, A Royal Kiss & Tell. Negotiations between Alucia and Wesloria are taking place in London, bringing home Hollis’s sister Eliza, her royal husband, and their eight-month-old girl, as well as their best friend, Caro and her princely husband. Hollis has been lonely and unsettled; trying to find her way in the world now that her support system is gone.

Hollis has been working to shift her Ladies’ Gazette from home and beauty tips to real political news, so with the arrival of the Alucians and Weslorians, she feels it is her opportunity to learn and report on the peace negotiations. This brings her into contact with a Weslorian man with a secret, and Hollis is determined to uncover more about the strange Mr. Marek Brendan.

Hollis is a self-reliant widow with a huge heart. In the previous two books, readers were made to believe she’s in love with her butler, Donovan. And in A Princess by Christmas, we learn more about their unique relationship. I absolutely love Donovan and the direction Ms. London took his storyline. Their friendship is one of the best things about the book, and created a few tender and heart-felt moments.

Even though the book is shared from both Marek and Hollis’s POVs, it feels like it is really Hollis’s story and Marek is a key player. We see inside Hollis and understand her heart. She is lonely and ready to move on, but she doesn’t know where to go. She has responsibilities to her staff, and isn’t sure she can leave or change. I admire how driven she is to uncover perceived secrets, yet is perceptive to the sensitivity of the truth. On the other hand, Marek is driven and focused on protecting his king and Wesloria. He understands the enormity of his secret and the impacts it would have on the nation.

The romance between the pair is very much a drawn-out journey. The pair doesn’t really connect until the midpoint of the story. But once they do, they realize how much they have in common and that the quirks of the other are enjoyable and familiar in ways. They are attracted to one another, but it takes an evening of too much absinthe to finally push the two together. Although it’s only a matter a days after that until the end of the book, their love doesn’t feel rushed. They are two people in the right place in life to fall in love.

I like that the pair works together to uncover the truths of what is happening with the Weslorian delegation. Similar to the previous two titles, the bulk of the action taken to correct the “wrongs” of the story take place off page. However, this time around, we see enough to know what happened off page.

Overall, I throughly enjoyed reading A Princess by Christmas and the entire A Royal Wedding series. The books are a delightful mix of historical romance with a dash of mystery and intrigue.

My Rating: B+ Liked It A Lot — Recommend

After three years of mourning—and turning her dear deceased husband’s gazette into the ton’s sauciest source of fashion and gossip—Hollis Honeycutt feels her life has been strangely bereft of late… Her sister is living abroad, and her best friend moved to the country. What must a young widow of rank and reputation do? Why, transform her society gossip sheets into serious investigative news, starting with a rumored coup…and the rather dashing, mysterious gentleman whom Hollis suspects might be the villain of her first real story, and she is the only one who can write it.

Marek Brendan is investigating terrible rumors of treachery and treason that threaten his home country of Wesloria, but he must proceed with caution. No one can discover the truth. After all, who would ever believe he is Wesloria’s lost crown prince? Only Hollis Honeycutt’s cerulean-blue eyes seem to know more than she’s letting on—and worse, Marek can’t seem to resist her curious charms. But even as betrayal threatens a nation and a throne, nothing is quite so dangerous as the lovely young widow who’s determined to find the truth…and a prince of her own.