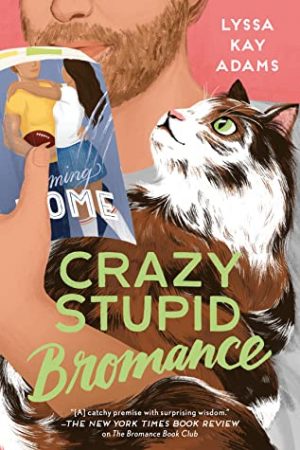 The Bromance Book Club series by Lyssa Kay Adams has been full of funny and steamy romances, and Crazy Stupid Bromance is a great addition.

This time around we are dealing with a friends-to-lovers romance between sexy computer geek Noah and cafe owner Alexis. The two have been fast best friends since the day they met. They both would like their friendship to develop into something more but they are afraid of messing up the best relationship either of them has had.

“Unrequited love made for a pathetic happy ever after.”

Crazy Stupid Bromance is not only about the romance between Alexis and Noah but about grieving issues they have been dealing with after each has lost a parent at a young age. Noah lost his dad to an explosion while he was overseas in the military and Alexis lost her mom to cancer. This is one of the big things they bond over in their friendship. Noah has to work through his anger issues about losing his dad and Alexis is dealing with the new issue of her sister showing up at her cafe. The sister she didn’t know she had.

Growing up it was just Alexis and her mom. She never knew her dad and now she finds out that she has a sister and a brother. Candi, the sister has come looking for Alexis because their dad needs a kidney. Alexis (and Noah) can’t help but think the only reason she has reached out is that she wants to save her father from dying, not that she wants anything to do with Alexis.

While Crazy Stupid Bromance deals with some heavy family issues there are still funny moments. The book club guys lend to comic relief with a laugh out loud scene at a massage place and Alexis’s cat, Beefcake, and his stalking of Noah is hilarious. And as always the Russian is the funniest of the group and I’m so excited his story, Isn’t It Bromantic? is coming out in June of 2021. I feel like it will be filled with hilarious moments and some heartbreak for him. He’s such a softy.

A hacktivist and a cat café owner decode the friend zone in this romantic comedy from the author of Undercover Bromance.

Alexis Carlisle and her cat café, ToeBeans, have shot to fame after she came forward as a victim of a celebrity chef’s sexual harassment. When a new customer approaches to confide in her, the last thing Alexis expects is for the woman to claim they’re sisters. Unsure what to do, Alexis turns to the only man she trusts—her best friend, Noah Logan.

Computer genius Noah left his rebellious teenage hacker past behind to become a computer security expert. Now he only uses his old skills for the right cause. But Noah’s got a secret: He’s madly in love with Alexis. When she asks for his help, he wonders if the timing will ever be right to confess his crush.

Noah’s pals in The Bromance Book Club are more than willing to share their beloved “manuals” to help him go from bud to boyfriend. But he must decide if telling the truth is worth risking the best friendship he’s ever had.